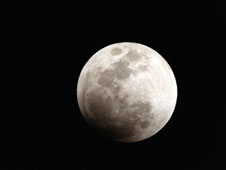 Huge and previously unknown deposits of chromite spinel, found front and center on the near side of the moon, are making researchers think again about the moon's geology. Credit: NASA/Kennedy
› Larger image 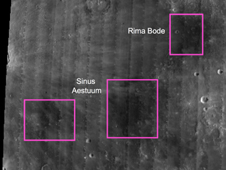 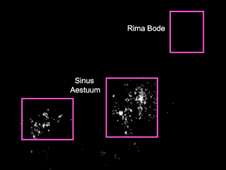 In the dark mantle deposits of the Sinus Aestuum (left), deposits of chromite spinel light up like beacons (right), but the nearby Rima Bode has no spinel. The researchers got this view by dividing the amount of reflected light at a wavelength of 2 µm by the amount at 1 µm. This ratio was calculated for every pixel in the image. Images Credit: Jessica Sunshine, University of Maryland
› Larger image (top)
› Larger image (bottom) 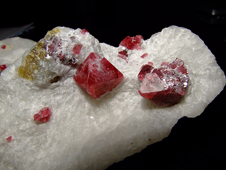 Spinel the gem comes in a rainbow of colors, such as these crystals in a white marble/calcite matrix. Image courtesy: Wikimedia Commons
› Larger image People don't discover a new type of moon rock every day, so consider the odds of finding one rich in a mineral that England's King Henry V wore on his battle helmet. And then imagine spotting, right on the Man in the Moon's nose, huge and previously unknown deposits of another mineral from the same family. Using data from NASA's Moon Mineralogy Mapper (M3) on India's Chandrayaan-1 spacecraft, a team of researchers recently did just that.

The new rock is a unique mixture of plain-old plagioclase -- plentiful in the Earth's crust and the moon's highlands -- and pink spinel, an especially beautiful arrangement of magnesium, aluminum and oxygen that, in its purest forms, is prized as a gemstone here on Earth. The rock was discovered on the far side of the moon by Carlé Pieters, a planetary scientist at Brown University, Providence, R.I. and the principal investigator for the M3 science team. Shortly after, massive deposits of a different type of spinel were identified on the near side by other M3 team members, led by Jessica Sunshine at the University of Maryland-College Park.

Because spinel hasn't figured strongly in discussions about the geology of the moon so far, the findings took the team by surprise. "This was definitely a 'Wow!' moment," says Noah Petro, a planetary geologist at NASA's Goddard Space Flight Center, Greenbelt, Md., who works closely with Sunshine. Additional team members come from several other institutions, including the Jet Propulsion Laboratory in Pasadena, Calif., which managed the M3 mission.

"I don't think anybody who studies the moon would have expected to see this so prominently at the surface," Petro adds.

Spinel the gem comes in a rainbow of colors, but the diva is the red stone, so similar to ruby in color and hardness that it earned the nickname the "great impostor." The Black Prince's Ruby -- a fiery 170-carat stone owned by Edward of Woodstock (the Black Prince) in the 14th century, worn on King Henry V's battle helmet and later incorporated into the Imperial State Crown of England -- is actually a spinel. So is the 361-carat Timur Ruby, also in the British crown jewels. Even after the two stones could be reliably distinguished, spinel was sought by royalty worldwide. The crown jewels of Iran, for example, feature a collection of these gems.

Despite this regal lineage, the researchers weren't looking for spinel on the moon. They were focused on mapping the minerals olivine and pyroxene, which were already known to co-exist with plagioclase on the moon. For this, the team relied on the M3 remote scanner, which imaged the surface in strips 40 kilometers (almost 25 miles) wide and measured the amount of reflected light at nearly a hundred wavelengths of light. The composition of the rock can be deduced from distinctive changes in this signal at various wavelengths. As expected, the researchers located olivine and pyroxene deposits. In addition, two areas about 1 kilometer by 1 kilometer (a little more than 1/2 mile by 1/2 mile) each, stood out on the rim of the Moscoviense Basin on the moon's far side. The signature in those spots was unmistakable: spinel.

"My first reaction was, it's not possible. It's crazy!" says Sunshine, remembering when Pieters first described what she saw. Little bits of spinel have been found in moon rocks before. And if this had been a small amount of spinel mixed with olivine and pyroxene, nobody would have been surprised; that has been seen elsewhere. But when the image strips were pieced together to show the whole face of the moon, the researchers could see that the spinel was completely separate from the olivine and pyroxene.

"We've never seen the magnesium–aluminum spinel without olivine and pyroxene," explains Larry Taylor, an M3 team member from the University of Tennessee, Knoxville. "This means we're talking about a new composition of magma . . . [and] a whole new range of processes for mineral concentrations on the moon that we haven't appreciated until now."

The discovery "shows the power of remote sensing," Petro adds. "The global view of the M3 imaging spectrometer makes it possible to find small features of interest and, at the same time, to see how unique they are in context of the entire moon."

Why the deposits would appear only in the Moscoviense Basin remains a bit of a geological mystery, says Petro, but the team thinks the catastrophic impact that formed the basin might have brought up spinel material from deep within the crust.

Intrigued by the spinel on the far side, the researchers looked for it on the near side of the moon. And, boy, did they find it.

Led by Sunshine, the team identified chromite spinel scattered throughout an enormous section of the Sinus Aestuum, a big plain that many people recognize as the nose of the Man in the Moon. Unlike spinel the gemstone, chromite spinel is a dark mineral made from iron, chromium and oxygen; both are from the same family of minerals, the members of which share a common structure but can have very different chemical makeups.

"What I find really amazing is the near-side spinel deposits are huge -- tens of thousands of square kilometers -- and they are sitting smack-dab in the center of the near side," says Sunshine. "All of us [on Earth] have literally been staring at these our whole lives, and we didn't know they were there."

Earlier studies of the moon didn't locate this chromite spinel because the instruments didn't reach the critical wavelength of 2 micrometers (µm), where a key part of the spinel signature is apparent. Also, researchers had assumed that Sinus Aestuum had the same composition as the nearby Rima Bode, which has been studied closely and has no trace of spinel.

Though the scientists are still working out a detailed explanation of their findings, they are convinced that the spinel formed on the moon, says Sunshine. The near-side deposit is simply too large to have formed elsewhere in the solar system and been delivered to the moon.

The team also thinks the chromite spinel is volcanic and has been exhumed from far below the surface, says Petro. The spinel might have been covered by later volcanic eruptions and then exposed a little at a time by eons of cratering. "Maybe it represents a very early stage of lunar volcanism," says Sunshine. "It's hard to know the answers right now. We're still in the question phase."

But the surprising findings do lead the team to one conclusion: “Despite everything we have learned," says Petro, "the moon still has a lot of surprises for us.”