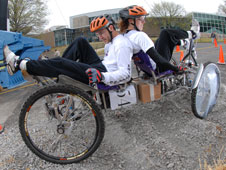 HUNTSVILLE, Ala. -- Enterprising student engineers from Erie High School Team II in Erie, Kan., and the University of Evansville in Evansville, Ind., are over the moon this week. The Erie and Evansville teams won first place in the high school and college divisions, respectively, of NASA's 15th annual Great Moonbuggy Race, held April 4-5 at the U.S. Space & Rocket Center in Huntsville, Ala.

Forty-six high school, college and university teams from around the United States, Puerto Rico, Canada, India and Germany fielded lightweight moonbuggies of their own design, many of which have been ongoing class projects since the start of the fall 2007 school year.

The buggies are inspired by the original lunar rover used during the Apollo moon missions in the early 1970s. The race honors the legacy of ingenuity and creative problem-solving shown by the original rover designers at NASA's Marshall Space Flight Center in Huntsville, which organizes the race each year. 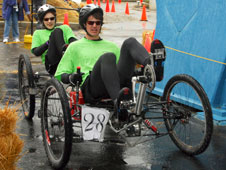 Victorious high school moonbuggy racers from Erie, Kan. Image credit: NASA/MSFC
Marshall Center engineer Mike Selby, timekeeper for the weekend races -- and a former moonbuggy racer himself during his years as an engineering student at the University of Alabama in Huntsville – said Erie High's 3:17 completion time is the fastest-ever for the current moonbuggy course. No small feat: The half-mile course simulates lunar ground conditions, complete with steep slopes, rocky outcroppings, sandy craters and sharp ridges like those dug by ancient lunar lava flows.

The winning teams received trophies, cash prizes and other awards. NASA and the event's corporate sponsors handed out a variety of additional honors, including awards for "Best Moonbuggy Design" and the college-level "Crash and Burn" award for the most spectacular vehicle breakdown of the day.

"Once again, we're amazed and inspired by the ingenuity and energy of our participating teams," said Tammy Rowan, manager of the Marshall Center's Academic Affairs Office, which organizes the moonbuggy race. "This race is a great example of how NASA's educational initiatives can inspire and motivate new generations to carry on the nation's journey of discovery, to the moon and onward into the solar system.

"We look forward to 2009 and the next edition of NASA's Great Moonbuggy Race," Rowan added. "We expect many of these teams back -- bringing them another step toward becoming the professional scientists, mathematicians, engineers and technologists of tomorrow." 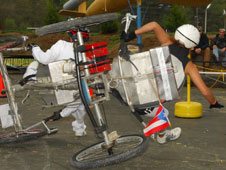 Complete lists of winners and photos of the top racers can be found at:


Past winners, information about the course and NASA's official fact sheet about the race are available online at: