Grow Text SizeShrink Text Size
NASA Scientists Find Evidence for Liquid Water on a Frozen Early Mars
NASA scientists modeled freezing conditions on Mars to test whether liquid water could have been present to form the surface features of the Martian landscape. 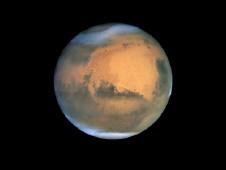 Evidence suggests flowing water formed the rivers and gullies on the Mars surface, even though surface temperatures were below freezing. Dissolved minerals in liquid water may be the reason. Photo Credit: NASA Researchers report that fluids loaded with dissolved minerals containing elements such as silicon, iron, magnesium, potassium and aluminum, can remain in a liquid state at temperatures well below freezing. The results of this research appear in the May 21 issue of Nature magazine entitled "Stability Against Freezing of Aqueous Solutions on Early Mars."

"We found that the salts in water solutions can reduce the melting point of water, which may help explain how liquid water existed in a frozen Martian environment," said Alberto Fairén, a space scientist at NASA Ames Research Center, Moffett Field, Calif. and the lead author of the study.

To understand what formed the surface features on Mars, scientists have focused on the early Martian conditions. Was early Mars warm and wet, or cold and dry? Surface features throughout most of the Martian landscape suggest the presence of water ponds ranging from seas to lakes, and rivers and gullies formed by flowing water, which imply that early Mars was wet.

But there also is some evidence that suggests that Mars may have been permanently cold, with global temperatures well below the freezing point of pure water. To study the 'liquidity' of water on Mars, climate modelers first simulated various concentrations of greenhouse gases in its atmosphere. They found that these gases cannot efficiently raise the surface temperature above freezing.

A greenhouse atmosphere produced by carbon dioxide and water would have been saturated well below freezing. In addition, the amount of methane needed to raise the surface temperature above freezing, implies the planet had a terrestrial-like biological source for its methane supply, according to previous investigations.

Scientists then took another approach and looked at water solutions containing weathering basalts, similar to those seen at the Mars landing sites. They calculated these fluids' freezing points and evaporative processes. Results showed that a significant amount of weathering fluids containing silicon, iron, magnesium, calcium, chloride, sodium, potassium and aluminum remain in the liquid at temperatures well below freezing.

"Our goal was to learn how a combination of different processes of evaporation and freezing affect the freezing point of a hypothetical Martian solution. We also wanted to see how the liquid phases formed and destabilized over the evolution of different solutions," added Alfonso Davila, a co-author of the paper at NASA Ames Research Center, Moffett Field, Calif.