The Moon and the Magnetotail 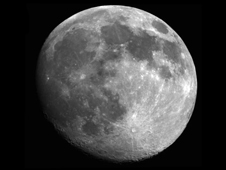 The moon. Credit: NASA Behold the full moon. Ancient craters and frozen lava seas lie motionless under an airless sky of profound quiet. It’s a serene, slow-motion world where even a human footprint may last millions of years. Nothing ever seems to happen there, right?

NASA-supported scientists have realized that something happens every month when the moon gets a lashing from Earth’s magnetic tail.

“Earth’s magnetotail extends well beyond the orbit of the moon and, once a month, the moon orbits through it,” says Tim Stubbs, a University of Maryland scientist working at the Goddard Space Flight Center. “This can have consequences ranging from lunar ‘dust storms’ to electrostatic discharges.”

Yes, Earth does have a magnetic tail. It is an extension of the same familiar magnetic field we experience when using a Boy Scout compass to find our way around Earth’s surface. Our entire planet is enveloped in a bubble of magnetism, which springs from a molten dynamo in Earth’s core. Out in space, the solar wind presses against this bubble and stretches it, creating a long “magnetotail” in the downwind direction.

It is during those six days that strange things can happen. 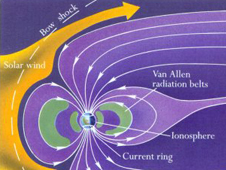 Fine particles of dust on the moon's surface can actually float off the ground when they become charged by electrons in Earth's magnetotail. Credit: NASA
> Larger image During the crossing, the moon comes in contact with a gigantic “plasma sheet” of hot charged particles trapped in the tail. The lightest and most mobile of these particles, electrons, pepper the moon’s surface and give the moon a negative charge.

On the moon’s dayside this effect is counteracted to a degree by sunlight: UV photons knock electrons back off the surface, keeping the build-up of charge at relatively low levels. But on the nightside, in the cold lunar dark, electrons accumulate and surface voltages can climb to hundreds or thousands of volts.

Imagine what it feels like to be a sock pulled crackling from a dryer. Astronauts on the moon during a magnetotail crossing might be able to tell you. Walking across the dusty charged-up lunar terrain, the astronauts themselves would gather a load of excess charge. Touching another astronaut, a doorknob, a piece of sensitive electronics -- any of these simple actions could produce an unwelcome discharge. “Proper grounding is strongly recommended,” says Stubbs. 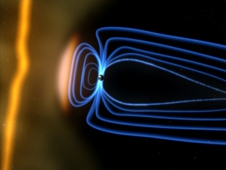 Earth's magnetic field responds to the solar wind much like an airport wind sock: It stretches out with its tail pointing downwind. Credit: NASA/Goddard Space Flight Center- Conceptual Image Lab
> Magnetospheric substorm animation The ground, meanwhile, might leap into the sky. There’s growing evidence that fine particles of moondust might actually float, ejected from the lunar surface by electrostatic repulsion. This could create a temporary nighttime atmosphere of dust ready to blacken spacesuits, clog machinery, scratch faceplates (moondust is very abrasive) and generally make life difficult for astronauts.

Stranger still, moondust might gather itself into a sort of diaphanous wind. Drawn by differences in global charge accumulation, floating dust would naturally fly from the strongly-negative nightside to the weakly-negative dayside. This “dust storm” effect would be strongest at the moon’s terminator, the dividing line between day and night.

Much of this is pure speculation, Stubbs cautions. No one can say for sure what happens on the moon when the magnetotail hits, because no one has been there at the crucial time. “Apollo astronauts never landed on a full moon and they never experienced the magnetotail.”

The best direct evidence comes from NASA’s Lunar Prospector spacecraft, which orbited the moon in 1998-99 and monitored many magnetotail crossings. During some crossings, the spacecraft sensed big changes in the lunar nightside voltage, jumping “typically from -200 V to -1000 V,” says Jasper Halekas of UC Berkeley who has been studying the decade-old data. 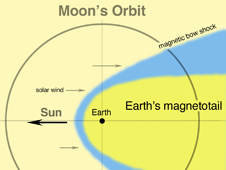 “As a result, you can imagine how dynamic the charging environment on the moon is. The moon can be just sitting there in a quiet region of the magnetotail and then suddenly all this hot plasma goes sweeping by causing the nightside potential to spike to a kilovolt. Then it drops back again just as quickly.”

The roller coaster of charge would be at its most dizzying during solar and geomagnetic storms. “That is a very dynamic time for the plasma sheet and we need to study what happens then,” he says.

What happens then? Next-generation astronauts are going to find out. NASA is returning to the moon in the decades ahead and plans to establish an outpost for long-term lunar exploration. It turns out they’ll be exploring the magnetotail, too.

Earth’s magnetotail isn’t the only source of plasma to charge the moon. Solar wind can provide charged particles, too; indeed, most of the time, the solar wind is the primary source. But when the moon enters the magnetotail, the solar wind is pushed back and the plasma sheet takes over. The plasma sheet is about 10 times hotter than the solar wind and that gives it more "punch" when it comes to altering the charge balance of the moon's surface. Two million degree electrons in the plasma sheet race around like crazy and many of them hit the moon's surface. Solar wind electrons are relatively cool at only 140 thousand degrees, and fewer of them zip all the way down to the shadowed surface of the moon's nightside. Tony Phillips
NASA's Goddard Space Flight Center
› Back To Top