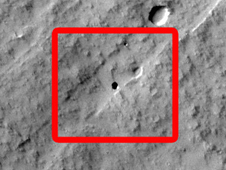 The students in Dennis Mitchell's science class were examining Martian lava tubes as their project in the Mars Student Imaging Program offered by NASA and Arizona State University. According to the university, the imaging program allows students in upper elementary grades through to college students to participate in Mars research by having them develop a geological question to answer. The students actually command a Mars-orbiting camera to take an image to answer their question. Since MSIP began in 2004, more than 50,000 students have participated.

"The students developed a research project focused on finding the most common locations of lava tubes on Mars," Mitchell said. "Do they occur most often near the summit of a volcano, on its flanks or the plains surrounding it?"

The feature, on the slope of an equatorial volcano named Pavonis Mons, appears to be a skylight in an underground lava tube. Similar 'cave skylight' features have been found elsewhere on Mars, but this is the first seen on this volcano.

The students subsequently submitted the site as a candidate for imaging by the High Resolution Imaging Science Experiment (HiRISE) camera on NASA's Mars Reconnaissance Orbiter. HiRISE can image the surface at about 30 centimeters (12 inches) per pixel, which may allow a look inside the hole in the ground.

"It gives the students a good understanding of the way research is conducted and how that research can be important for the scientific community. This has been a wonderful experience," Mitchell said."