Grow Text SizeShrink Text Size
Communicating in Space
When astronauts venture outside of a spaceship or the International Space Station, they must wear protective space suits to keep them safe from the harsh environment of space. While inside these pressurized suits, it's essential that they remain in constant communication with the rest of the crew in space as well as Mission Control Center on Earth.

While wearing the current space suits, astronauts wear a Communications Carrier Assembly (CCA), or "Snoopy Cap" — a fabric hat fitted with microphones in the ear area for listening and boom microphones in front of the mouth for speaking. These caps are worn under the helmet and visor that surround an astronaut's head. 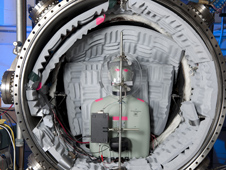 A new Integrated Audio system, which enables astronauts to communicate in space, is being tested at NASA's Glenn Research Center in Cleveland in a test rig. Image Credit: NASA NASA is in the process of completely redesigning their space suits, with the goal of creating a brand new space suit to be used starting in 2020. Redesigned and reinvented communications equipment will be an important facet of the new suit.

NASA's Glenn Research Center in Cleveland is working on different parts of the new space suit, including communications equipment. The Exploration Technology Development Program (ETDP) is involved with testing various proposed solutions to the communications requirements within the suit.

The Communications Carrier Assembly (CCA), while effective, has some logistical drawbacks. Multiple cap sizes must be available due to the difference in astronauts' head sizes. The caps cannot be adjusted once the visor of the helmet is in place and the astronaut is in space, which means that if the microphones shift, communication quality can decrease. The boom microphones can also interfere with feeding and drinking mechanisms during long-duration spacewalks. An additional problem is that astronaut sweat can negatively interfere with the performance of the electrical and mechanical parts in the CCA.

For several years, Glenn has performed research and development on a variety of communications technologies. About six years ago, teams at Glenn began working on integrated audio solutions to support extravehicular activities, like space walks. In 2008, Glenn signed a Small Business Innovation Research (SBIR) agreement with WeVoice Inc. of Bridgewater, N.J. Together, they began developing and testing an integrated audio system that is built directly into a space helmet.

"The integrated audio system is where the microphones and earphones are removed from the Communications Carrier Assembly and integrated into the structure of the space suit itself," says Obed "Scott" Sands, an electronics engineer at Glenn, lead for Configuration II Audio under Constellation and lead for integrated audio development for the Exploration Technology Development Program (ETDP). 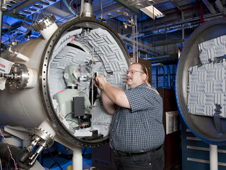 The microphone array and associated signal processing are needed in the integrated audio system to overcome decreased sound quality. Sound quality can be negatively impacted because the microphones of the integrated audio system are positioned on the inside of the helmet — farther from an astronaut's mouth. This makes the microphones more susceptible to interference from noise created inside of the suit as well as noise from vibrations of the spacesuit structure.

The current technology development approach to solving these problems involves processing signals from each element in the array, known as Multi-Channel Noise Reduction. This new filtering approach features technology adapted from video teleconferencing systems. Advanced filters are used for each of the array's channels, and additional noise reduction is used to isolate the sound of speech.

Several speakers are installed in the helmet, which are designed to focus the sound towards the astronaut's ears. These speakers also isolate other sounds so that crew members can effectively hear. This solves the issue of occasional unclear inbound communications (listening). 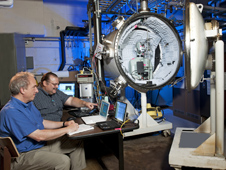 The test rig is fitted with acoustic panels, to isolate noise. It is also pressurized to the same level as NASA space suits. Image Credit: NASA "This new system will provide the crew member with more freedom and increased reliability," says Terry O'Malley, an aerospace engineer and the EVA lead at Glenn. "It also provides the system designers with increased flexibility in designing the system."

Testing with a Torso

In order to assess the effectiveness of the new system, the conditions inside a space suit must be replicated. Then the integrated audio is tested by using a specialized piece of equipment that creates human speech. This equipment, shaped like a human torso, is called HATSMAN — Head and Torso Simulator. It is manufactured by Brüel & Kjær, a company based in Denmark.

"It listens like a person and talks like a person," Sands says. "It's got microphones in its ears and a speaker in its mouth, and the radiation patterns conform to international standards for mannequins that emulate human speech and hearing."

The testing involves taking advanced measurements of the noise produced by HATSMAN and received by the integrated audio system and vice versa. This anthropometric measuring helps Glenn researchers refine their design, using data created by machines that accurately represent the needs of the humans who will eventually use the completed system.

The HATSMAN at Glenn is installed in a testing tank that is carefully designed to mimic the environment inside a space suit. It is lined with acoustic absorbing foam that isolates extra noise that the tank itself might create. Then a noise source simulates the sound created by space suits, which is generated from a recording taken inside an actual space suit. Special microphones that do not create their own static pressure are installed, which take measurements without affecting the readings.

"The biggest reason we're in the tank is that we can create a static pressure environment that simulates the inside of the actual suit," says Dave Pleva (DB Consulting Group, Inc.), an IT Project Analyst at Glenn who supports audio development work for ETDP. 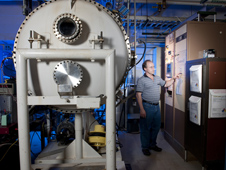 The HATSMAN creates and receives vocal sounds. This determines the effectiveness of the Integrated Audio system. Image Credit: NASA The tank recreates the pressure inside of the suit, not the pressure of the entirety of space — because the integrated audio system is made for use inside a helmet. The positive pressure inside a space suit is about 4.3 PSI (equivalent to about 35,000 feet altitude) so the team tests with this as its base. They also explore other variations in barometric pressure. The test rig also includes an acrylic dome to simulate the helmet. The team explores how speech and sound bounce off of the surface of the helmet.

A specialized device, called Digital Speech Level Analyzer (DSLA), provides vocal tracks for use in testing. Various utterances comprise the test speech to make it phonetically balanced — including all of the patterns and pairs that, statistically speaking, would show up in the English language. Both male and female voices are used.

"We generate a signal, it goes through an amplifier that powers the speaker in the HATSMAN, and then the array picks up the speech. The array then processes the speech and sends out the process signal to the DSLA. The DSLA then does a comparison of what it sent and what it receives," Pleva says.

The primary performance concern is speech intelligibility. Although quality of sound is also important, the main interest is that as many words as possible be successfully transmitted both ways. This can be effectively measured using the equipment in place.

"The next step would be to build an even higher fidelity version of this integrated audio system. Then we'll do another round of these tests. Eventually, we'll have a human being tested inside a pressure chamber," says Dave Irimies, a computer engineer and ETDP lead at Glenn.

The ongoing research, development and testing of this integrated audio system is part of the Space Audio Development and Evaluation Laboratory at Glenn.

"Our direction is replacing the current suit on the space station and shuttle. The current certification runs out in ten years, in 2020, so… this is an opportunity to use even more advanced technology," Irimies says. "This work is pressing forward."

The team hopes that the integrated audio system can commence testing on the space station in 2016. The technology may also be useful for communicating inside the station as well as during space walks. There may also be the potential that the technology can help on Earth. WeVoice Inc. is currently working with the University of Pittsburg on one potential spin-off: developing a teleconferencing system using microphone arrays for operating rooms in hospitals.

The team looks forward to working together to continue testing and evolving their integrated audio system, with the goal of significantly influencing how the next generation space suit will work.

"We all challenge each other in different ways, all the time," Sands says. "It's a lot of fun, getting new concepts infused into space systems. That's what NASA is all about."