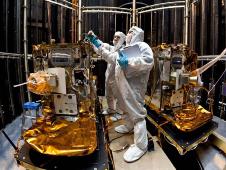 Technicians prepare to hoist one of the two Grail spacecraft upon completion of a thermal vacuum test at the Lockheed Martin Space Systems facility in Denver. Image credit: NASA/JPL-Caltech/LMSS
› Full image and caption

NASA's two Gravity Recovery And Interior Laboratory (Grail) spacecraft have completed all assembly and testing prior to shipment to Florida.

As seen in the photo, taken April 29, technicians installed lifting brackets prior to hoisting the 200-kilogram (440- pound) Grail-A spacecraft out of a vacuum chamber at Lockheed Martin Space Systems, Denver. Along with its twin Grail-B, the Grail-A spacecraft underwent an 11-day-long test that simulated many of the flight activities they will perform during the mission, all while being exposed to the vacuum and extreme hot and cold that simulate space.

The Grail mission is scheduled for launch late this summer. The Grail-A and Grail-B spacecraft will fly in tandem orbits around Earth's moon for several months to measure its gravity field in unprecedented detail. The mission will also answer longstanding questions about the moon and provide scientists with a better understanding of how Earth and other rocky planets in the solar system formed.

NASA's Jet Propulsion Laboratory, Pasadena, Calif., manages the Grail mission. The Massachusetts Institute of Technology, Cambridge, is home to the mission's principal investigator Maria Zuber. The Grail mission is part of the Discovery Program managed at NASA's Marshall Space Flight Center in Huntsville, Ala. Lockheed Martin Space Systems, Denver, built the spacecraft. Launch management for the mission is the responsibility of NASA's Launch Services Program at the Kennedy Space Center in Florida. JPL is a division of the California Institute of Technology in Pasadena.