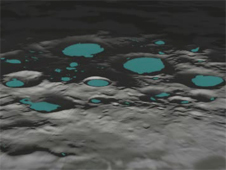 New research from NASA's Lunar Science Institute indicates that the solar wind may be charging certain regions at the lunar poles to hundreds of volts. In this short video Dr. Bill Farrell discusses this research and what it means for future exploration of the moon's poles. Credit: NASA/Goddard Space Flight Center
› Download (31 MB mpg)
› Transcript (pdf)
› View more video formats As the solar wind flows over natural obstructions on the moon, it may charge polar lunar craters to hundreds of volts, according to new calculations by NASA’s Lunar Science Institute team.

Polar lunar craters are of interest because of resources, including water ice, which exist there. The moon’s orientation to the sun keeps the bottoms of polar craters in permanent shadow, allowing temperatures there to plunge below minus 400 degrees Fahrenheit, cold enough to store volatile material like water for billions of years. "However, our research suggests that, in addition to the wicked cold, explorers and robots at the bottoms of polar lunar craters may have to contend with a complex electrical environment as well, which can affect surface chemistry, static discharge, and dust cling," said William Farrell of NASA’s Goddard Space Flight Center, Greenbelt, Md. Farrell is lead author of a paper on this research published March 24 in the Journal of Geophysical Research. The research is part of the Lunar Science Institute’s Dynamic Response of the Environment at the moon (DREAM) project.

"This important work by Dr. Farrell and his team is further evidence that our view on the moon has changed dramatically in recent years," said Gregory Schmidt, deputy director of the NASA Lunar Science Institute at NASA's Ames Research Center, Moffett Field, Calif. "It has a dynamic and fascinating environment that we are only beginning to understand."

Solar wind inflow into craters can erode the surface, which affects recently discovered water molecules. Static discharge could short out sensitive equipment, while the sticky and extremely abrasive lunar dust could wear out spacesuits and may be hazardous if tracked inside spacecraft and inhaled over long periods.

The solar wind is a thin gas of electrically charged components of atoms -- negatively charged electrons and positively charged ions -- that is constantly blowing from the surface of the sun into space. Since the moon is only slightly tilted compared to the sun, the solar wind flows almost horizontally over the lunar surface at the poles and along the region where day transitions to night, called the terminator.

Since electrons are over 1,000 times lighter than ions, the lighter electrons in the solar wind rush into a lunar crater or valley ahead of the heavy ions, creating a negatively charged region inside the crater. The ions eventually catch up, but rain into the crater at consistently lower concentrations than that of the electrons. This imbalance in the crater makes the inside walls and floor acquire a negative electric charge. The calculations reveal that the electron/ion separation effect is most extreme on a crater's leeward edge – along the inside crater wall and at the crater floor nearest the solar wind flow. Along this inner edge, the heavy ions have the greatest difficulty getting to the surface. Compared to the electrons, they act like a tractor-trailer struggling to follow a motorcycle; they just can’t make as sharp a turn over the mountain top as the electrons. "The electrons build up an electron cloud on this leeward edge of the crater wall and floor, which can create an unusually large negative charge of a few hundred Volts relative to the dense solar wind flowing over the top," says Farrell.

The negative charge along this leeward edge won’t build up indefinitely. Eventually, the attraction between the negatively charged region and positive ions in the solar wind will cause some other unusual electric current to flow. The team believes one possible source for this current could be negatively charged dust that is repelled by the negatively charged surface, gets levitated and flows away from this highly charged region. "The Apollo astronauts in the orbiting Command Module saw faint rays on the lunar horizon during sunrise that might have been scattered light from electrically lofted dust," said Farrell. "Additionally, the Apollo 17 mission landed at a site similar to a crater environment – the Taurus-Littrow valley. The Lunar Ejecta and Meteorite Experiment left by the Apollo 17 astronauts detected impacts from dust at terminator crossings where the solar wind is nearly-horizontal flowing, similar to the situation over polar craters."

Next steps for the team include more complex computer models. "We want to develop a fully three-dimensional model to examine the effects of solar wind expansion around the edges of a mountain. We now examine the vertical expansion, but we want to also know what happens horizontally," said Farrell. As early as 2012, NASA will launch the Lunar Atmosphere and Dust Environment Explorer (LADEE) mission that will orbit the moon and could look for the dust flows predicted by the team’s research.