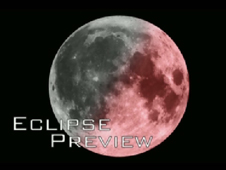 > View lunar eclipse preview video
Credit: NASA
In the late night hours of Feb. 20, 2008, a total lunar eclipse will dazzle the night sky. And this lunar eclipse may be worth staying up for, because it will be the last one until December 2010.

A lunar eclipse occurs when the Earth lines up directly between the sun and the moon, casting a shadow over the moon's surface. The February 20, 2008 eclipse will last for nearly 3 and a half hours. For a full 50 minutes of that time the moon will be in totality - the period when the lunar surface is completely covered by the Earth's shadow.

During an eclipse the moon changes color, going from a light gray color to an orange or deep red shade. This is totality. The moon takes on this new color because indirect sunlight is still able to pass through the Earth's atmosphere and cast a glow on the moon.

This map shows when the eclipse will be visible across the United States. Credit: NASA
> Larger image The exact color that the moon appears depends on the amount of dust and clouds in the atmosphere. If there are extra particles in the atmosphere, from say a recent volcanic eruption, the moon will appear a darker shade of red.

Residents of the Americas, Europe and Africa will have the best view of this eclipse.

Here in the United States, the entire eclipse will be visible for the majority of the country. However, residents on the West Coast will miss out on watching the early stages of the eclipse, as it begins before moonrise.