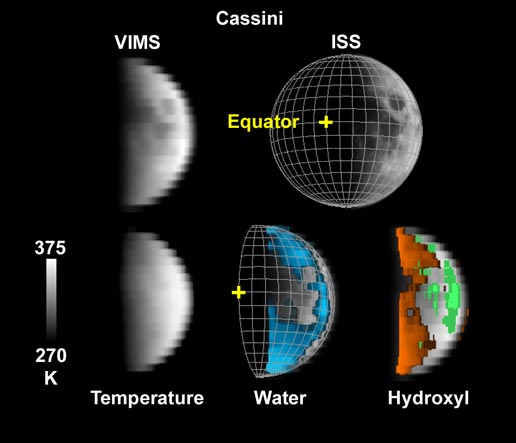 NASA's Cassini spacecraft observations of the moon on Aug. 19, 1999 show water and hydroxyl at all latitudes on the surface, even areas exposed to direct sunlight. The Visual and Infrared Mapping Spectrometer (VIMS) instrument on Cassini made the observations as the spacecraft flew by the moon. Its view was slightly south of the lunar equator. The yellow cross indicates a latitude and longitude of zero.

The picture at top left shows infrared light reflected off the moon as seen by VIMS. The top right picture shows the moon as seen by Cassini's Imaging Science Sub-system (ISS) during the flyby. The image at bottom left shows temperatures of the moon derived from VIMS data. Temperatures near the equator are hotter than boiling water on Earth. The bottom center picture shows a VIMS map of water associated with minerals. At bottom right is a VIMS map of hydroxyl-bearing minerals, created by chemical reactions with minerals and glasses in the lunar soil.