A team led by the NASA Engineering and Safety Center designed and built such a space capsule, called a crew module, then mounted the full-scale test article into a custom-built rig for static testing at NASA's Langley Research Center, Hampton, Va. Internal pressure and forces are being applied to critical parts of the crew module, simulating the stresses it would encounter as it carries astronauts during a space flight.

"We pressurized the module to twice Earth's atmosphere to demonstrate the ultimate design capability of the structure, and followed that by pushing and pulling it to simulate the forceful tug of the different mission phases," said Mike Kirsch, manager of the Composite Crew Module (CCM) project. "There were no anomalies and performance aligned amazingly well with analytical predictions," he added.

Additional testing of the composite crew module will be conducted at Langley to gauge the structure's resistance to damage, culminating in a planned test to failure. As a first step, the structure has proven resistant to the type of damage that might occur during ground handling, as proven by a carefully designed set of damage-related experiments followed by a repeat of the internal pressure test.

The crew module structure was fabricated by a collaborative team of NASA and industry partners at Alliant Techsystems (ATK), Iuka, Miss. Its top and bottom halves were laid up by hand using a stiffened honeycomb sandwich of carbon fiber impregnated with resin, heat- and pressure-treated in an autoclave, then spliced together using local heaters outside the autoclave. During buildup of the two halves, many of the critical, orthogonal joints were assembled by the use of preformed three dimensional weaving technology, termed Pi joints. 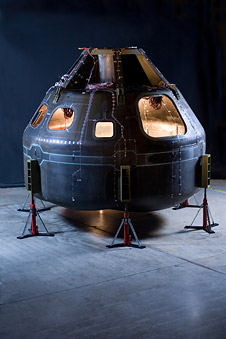 Composite Crew Module at ATK, where it was fabricated, prior to shipping to NASA Langley Research Center.
Credit: ATK

For the push and pull load tests, the structure was blanketed with 318 strain gages -- fiber optic cables generating about 3,500 channels of data -- and 80 acoustic sensors that listen for fiber breaks in the composite lay-ups during the testing. In addition, a stereo video system focused on complex-shaped zones of interest to generate a computerized view of surface deformation.

Composite materials are desirable because they are stiff and lightweight and can be formed into complex shapes that may be more structurally efficient. In space travel, where every additional pound of weight drives costs higher, any weight savings provides increased payload capacity and potentially reduces mission expense.

"One of the primary project objectives was to gain hands-on experience for NASA with our contract partners by designing, building and testing a full scale complex structure such as this, then communicate lessons learned to engineers working composites across the agency," said Kirsch.

There have been many lessons learned, including the challenge of keeping weight down while meeting design requirements for a human-rated spacecraft.

NESC sponsored the three-year CCM project as part of its mission to solve technical problems related to spaceflight and to make spaceflight safer. The CCM is an all-composite representation of the part-metal, part-composite flight crew module Orion, which is part of NASA's Constellation Program to return man to the moon and/or Mars.

For more information about the NASA Engineering and Safety Center, visit:


http://www.nasa.gov/offices/nesc/home/index.html
For more information about NASA and agency programs, visit: