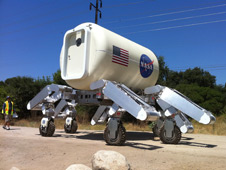 Engineers test the ATHLETE moon rover on one of the long dirt roads found just outside JPL. Image credit: NASA

Engineers from NASA's Jet Propulsion Laboratory are currently putting their All-Terrain, Hex-Limbed, Extra-Terrestrial Explorer (ATHLETE) through a series of long-drive tests on the long, dirt roads found adjacent to JPL. The JPL grounds do not include an unpaved area of sufficient size for testing such a large robot over a long distance. Some of the dirt roads in the Arroyo Seco (a wash located next to JPL) are wide enough for ATHLETE, and its close proximity to JPL allows the robot to be secured in its hangar between test runs.

The engineers want to test the moon rover's ability to meet a NASA milestone of traveling at least 40 kilometers (25 miles) over 14 days under its own power. The official demonstration is slated to begin in the Arizona high desert next month.

ATHLETE is a 1/2-scale working prototype of a robot under development to transport habitats and other cargo on the surface of the Moon or Mars. The ATHLETE concept is a level cargo deck carried by six wheels, each on the end of a configurable leg. The prototype stands approximately 4.5 meters (15 feet) tall and 4.5 meters (15 ft) wide and weighs about (about 2,300 kilograms (2.5 tons). The robot moves relatively slowly, with a top speed during traverse of approximately 2 kilometers per hour (1.25 mph).

For more information about ATHLETE, including photos and video clips, visit: http://athlete.jpl.nasa.gov/.