It's been 37 years since Apollo 15 astronauts Dave Scott and Jim Irwin fired their ascent engines and left the moon in their lunar module Falcon. But the signs of their visit -- like those of the other 5 lunar landings -- are still there, and today's generation of spacecraft are beginning to take a look. (Related: Hubble Shoots the Moon)

The Japanese space agency's lunar mission SELENE (Selenological and Engineering Explorer), also known as "Kaguya," has photographed a potential "halo" (above) left by the engines of the Apollo 15 lunar module at the Hadley Rille landing site near the Appennine Mountains (a "rille" is a long, canal-like depression on the lunar surface).

The "halo" is seen in the red circle in the 1 square kilometer image at left and the closeup at right. Scott and Irwin also saw the halo after leaving the surface, but this is the first time it has been photographed since the Apollo days. 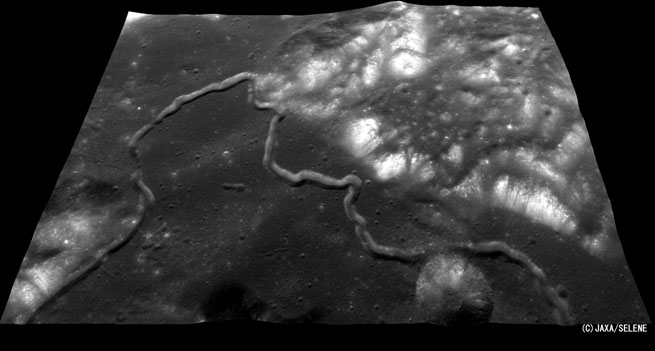 Full Resolution
A 3D view of the Hadley Rille landing site from SELENE's Terrain Camera. The rille is roughly 50 miles long and 1,000 feet deep. Apollo 15 was the fourth manned lunar landing and the first mission to use the lunar rover. 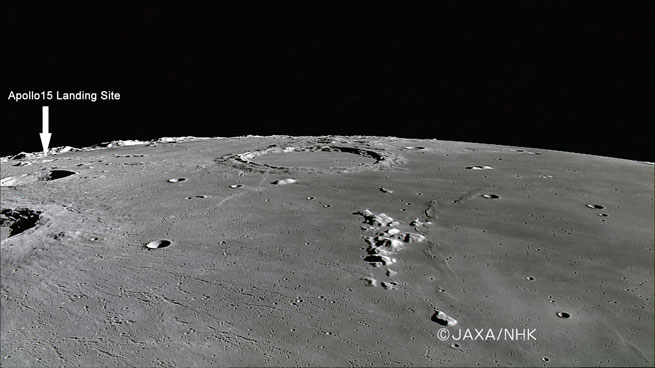 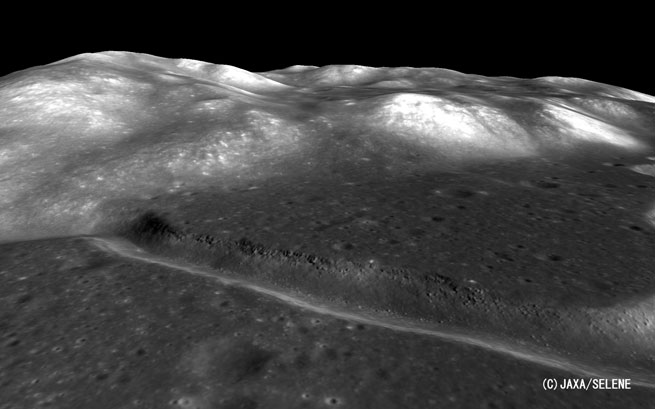 Full Resolution
This 3D view image around the Hadley Rille from the terrain camera clearly shows the layers of lava flows on the upper parts of the Rille's wall. These layers were probably formed approximately about 3.2 billion years ago. During the Apollo 15 mission, astronauts collected samples of basalt near the Hadley Rille, confirming many layers of lava flows, from several to 30 feet in depth. SELENE Images/Data courtesy JAXA
› Back To Top