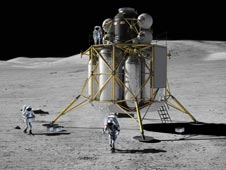 Three crew members work in the area of their lunar lander on the lunar surface in this NASA artist's rendering.
› Browse version of image

Scattered loosely around the beltline of Earth's nearest neighbor are six silent sentinels, testaments to America's first moon program. Standing all of 10 feet high and 30 feet wide (from footpad to footpad), each of these lunar module descent stages is more than a historical artifact that powered two Apollo astronauts to a safe landing on the moon's surface. They are unearthly reminders of the challenges that future moon crews will encounter on their final approach to the unknown.

"The Apollo landing missions were an unqualified success," said Chirold Epp of NASA's Johnson Space Center in Houston. "Every single time a lunar module headed toward the surface, it landed successfully and its crew got out and did a great job. But that doesn't mean there were not close calls. On four of the six Apollo landings, conditions were such that it gave us pause." (see: Four Out of Six Apollos Recommend ALHAT)

Though the last Apollo mission alighted on the moon more than three decades ago, the story of their landings, and where each of those 24 lunar module footpads settled into the soil, is still something Epp considers worthy of note. He is the manager of NASA's Autonomous Landing and Hazard Avoidance Technology (ALHAT) project ? an undertaking designed to provide America's next moon crews with invaluable data that could make the difference between a good day and a very bad day.

The ALHAT system is designed to automatically detect hazards such as craters and boulders and then direct the lander to the safest touchdown location available. It is a job ALHAT must perform ? on-the-fly.

"As it was with Apollo, future moon crews will have limited fuel supply and things will happen fast during a landing," said Epp. "With ALHAT, spacecraft can be guided safely, precisely, and repeatedly, to designated landing sites -- anywhere on the lunar globe. That's important because the locations we want to explore in the future are going to be more hazardous; the terrain and the lighting will be more challenging than before."

One of the challenging sites under consideration for a future landing is in the vicinity of the south pole of the moon, near the rim of an almost 12-mile-wide, 7.5-mile-deep cavity in lunar crust called Shackleton Crater. There, the sun's slanting rays can throw shadows that minimize or even hide surface features - the kind of surface features that an astronaut piloting a lunar lander would want to know about.

Boulders, craters and sloping hillsides are hazardous surface features that are easily understood. Any one big enough ? and in the right place - can leave a lander at a precarious angle or even cause it to topple over. A lunar surface hazard perhaps not so easily understood, but just as important, is the blinding dust that can be kicked up by a lander's rocket exhaust. That dust can block an astronaut's view of the boulders, slopes or craters below.

"ALHAT is the answer to all these challenges," said Andrew Johnson, ALHAT Project Element Manager from NASA's Jet Propulsion Laboratory in Pasadena, Calif. "Not enough sunlight at the landing site? We bring our own light. Moon dust getting in the way of seeing surface features and slopes? We figure out all the important nuances in the surface terrain from a vantage point far enough away that dust is not an issue."

How can ALHAT do all that? Perhaps the easiest way is to take you on a hypothetical lunar landing.

You are aboard a lunar lander headed towards a date with history at Shackleton Crater. The lander's descent stage rocket motor has been firing for over four minutes, bleeding off your orbital velocity and dropping you closer to the lunar surface. You have about five more minutes to go. Peering out the window you cannot see anything. The lander is making its approach to Shackleton from the backside of the moon, and it's pitch-black out there. You consult the spacecraft's computer, which uses sensors and software of the navigation system designed by the ALHAT Project to provide the information needed for a precise and safe landing. A laser onboard the lander points at the moon's surface.

"A laser is why ALHAT can operate just as well in the dark as in the light," said Johnson. "When we zap the surface with laser light, some of it bounces back. We have receivers that can read the signature of this returned laser light. We put that information through specially-designed computer algorithms, and what comes out is a three-dimensional glimpse of the lunar surface. That happens 30 times a second."

With 30 separate three-dimensional glimpses of the lunar surface coming through each second, the result quickly becomes a detailed 3-D map of the moon's undulating surface. Mountains, craters, hills and boulders you cannot see out your window appear on screen. ALHAT automatically compares these surface features with a three-dimensional lunar map stored in its memory.

"That is called Terrain Relative Navigation," said Johnson. "It is very important to know early in the descent that you are on the correct trajectory. And if you are not on the proper course, the sooner you know that, the easier it is to rectify things."

ALHAT's Terrain Relative Navigation is depicting that you are a little left of your planned course and a little low. You quickly modify your angle and rate of descent and are soon back on track. You notice that the lower you go, the more surface detail ALHAT reveals.

Two minutes before scheduled touchdown the lander has placed you about 5,000 feet over the surface and 1 mile to touchdown. The spacecraft pitches over to begin the final approach phase. ALHAT begins targeting the pre-selected landing zone with its laser and fires pulse after pulse. A three-dimensional map of the site begins to take shape on a screen in front of you.

"When you get close to the landing site, ALHAT goes into a mode called Hazard Detection and Avoidance," said Epp. "It will detect all the crater, rock and slope hazards in the landing site and provide a solution for a best landing option. We are confident that by the time a lunar landing crew gets within three-fourths mile of touchdown ALHAT can provide them a map of every boulder, crater and slope of consequence, within one sixteenth square mile ? about 32 football fields - the desired location."

The seconds tick by and as you fly over the moon's terminator (the edge of the shadow between light and darkness) you can see Shackleton Crater spread out before you in all its awe-inspiring glory. Other prominent surface features can be seen visually as well.

ALHAT's displays show the massive rim of Shackleton just as expected. Several rocks and a huge boulder are also where you anticipated them based on preflight briefings and simulations. ALHAT also indicates the slope of the landing zone is well within Altair's tolerance levels ? so you're good there too. But just to the left of the center point of the landing zone, ALHAT reveals there is a 20-foot-wide crater with steep sloping walls. Land too close to that and it could inhibit your planned lunar surface activities. Land a footpad in the crater and it could be even worse.

"When the crew begins to compare the ALHAT information with what they see out the window, that is called the "human interaction interval," said Epp. "They will use all the information available to them in their decision whether to continue to the original landing target, divert to a new landing target, or abort the landing entirely."

You decide to execute a short-range divert, aiming to land to the right of your initial target ? but still well within the planned landing zone. The lander responds to your commands and soon you are 100 feet directly above your newly planned landing site. The plume from its rocket engine is sending dust streaming out in sheets, obscuring your visual of the surface as you begin a final, vertical descent.. But your computer screens are displaying the surface below as ALHAT sees it, and everything is go.

Touchdown. Welcome to Shackleton Base.

"It will happen," said Epp. "Whether it is Shackleton Crater, Aristarchus Plateau or any number of other exceptional candidates, we are going back to the moon. And when we go, ALHAT could help us go just about anywhere we want."

NASA is currently going into the deserts of California and Nevada to test the ALHAT system.

For a video on ALHAT testing click here.
› Back To Top