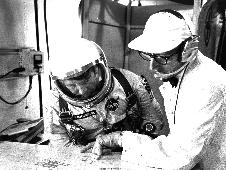 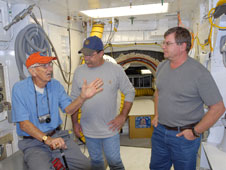 Image above: Guenter Wendt was never far from the space program, and he returned to Kennedy often. In 2009, he went to Launch Pad 39A and spent some time in the White Room with the technicians who help shuttle astronauts into place before launch. Photo credit: NASA/Jim Grossmann
›  View hi-res image Guenter Wendt, the legendary pad leader who often was the last person astronauts saw before going into space, died at his home Monday morning in Merritt Island, Fla., within a few miles of NASA's Kennedy Space Center. Wendt had been hospitalized with congestive heart failure and suffered a stroke. He was 85.

He worked at Kennedy for 34 years.

Wendt, a naturalized American originally from Germany, spoke with a thick accent and made a reputation as a strict overseer of the launch pads and spacecraft astronauts flew. Those traits earned him the nickname "Pad Fuhrer." He also was the first pad leader for crewed spacecraft.

The movie "Apollo 13" made famous the line about the pad leader when Tom Hanks, as astronaut Jim Lovell, asked, "I wonder where Guenter Wendt?"

Fact was, Wendt was never far from the space program. He stood watch over the Mercury and Gemini missions. The contractor for the Apollo spacecraft did not retain him as a full pad leader, Wendt recorded in his memoirs. So, Wendt was at home when the Apollo 1 fire erupted and killed Gus Grissom, Ed White and Roger Chaffee as they ran through a countdown test at Launch Pad 34.

Afterward, astronauts including Wally Schirra insisted on Wendt's return. Wendt was in charge of the White Room and launch pad when Schirra and his crew lifted off on Apollo 7, the first crewed Apollo mission after the fire. Wendt saw all the Apollo astronauts off on their way to the moon, too, before working as the head of flight crew safety for the Space Shuttle Program. He later served on the investigation board that reviewed the Challenger accident.

He retired in 1989, but still didn't leave the space program far behind. He worked as a consultant on Hanks' production "From the Earth to the Moon," and also worked with the team that recovered the Liberty Bell 7 spacecraft from the bottom of the Atlantic Ocean. That was the Mercury capsule Gus Grissom flew into space, but the spacecraft filled with water after splashdown and sunk.

He also returned to Kennedy on occasion and spoke with today's spaceflight engineers, technicians and specialists.

In May 2009, Wendt told them to establish credibility, learn from mistakes and "think outside the box." He also told them, "Don't fake it. Always have the facts to back up your statements," and "never take things for granted."

Wendt is survived by three daughters.