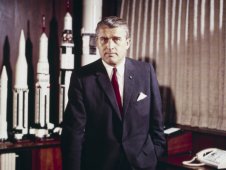 "I have learned to use the word 'impossible' with the greatest caution."
-- Wernher von Braun

March 23 marks the 100th anniversary of the birth of Dr. Wernher von Braun, a father of modern rocketry, an early champion of human space exploration and the first director of NASA's Marshall Space Flight Center in Huntsville, Ala.

"Dr. von Braun was a model of excellence -- in innovative engineering, in communicating his passion for his work and in his leadership of our historic efforts to burst the bonds of gravity and travel beyond the confines of Earth," said Gene Goldman, acting director of the Marshall Center. "His stature today remains as great as that of the towering rockets that sprang from his vision, and the limitless path they set us on."

Born in Wirsitz, Germany, on March 23, 1912, von Braun became a space buff in childhood, devouring the science fiction of Jules Verne and H.G. Wells. After reading noted physicist Hermann Oberth's 1923 report "Die Rakete zu den Planetenräumen" ("By Rocket to Space"), however, he left fiction behind, and took up the study of calculus and trigonometry so he could master the physics of rocketry.

By the time he received his doctorate from the University of Berlin in 1934, von Braun already was working for the German military, assisting Oberth in building and firing small, liquid-fueled rockets. During World War II, he led rocket research at the German propulsion laboratory in Peenemünde on the Baltic coast.

But von Braun wanted to do more than develop weapons. He wanted to use rocket power to fly to space, to create a new frontier for scientific exploration and, eventually, peaceful human colonization of the stars.

With these goals in mind, as the war ended in Europe, he and key members of his team came to the United States to advise the military on developing its own rocket program. The effort initially was based at Fort Bliss, Texas, with launch testing conducted at White Sands Proving Ground, N.M.

In 1950, von Braun and his team moved to Huntsville to oversee rocket development for the U.S. Army at Redstone Arsenal. There, they embarked on the development of the Jupiter rocket -- work which earned the growing urban community its most famous nickname: "Rocket City."

By the time the Marshall Center opened on Redstone Arsenal in 1960, von Braun had been a naturalized U.S. citizen for five years. As Marshall's first director -- a post he held from July 1, 1960, to Jan. 27, 1970 -- he spearheaded development of NASA's Mercury and Apollo space programs. Without benefit of modern computers or the high-tech manufacturing tools integral to today's aerospace industry, the team built and tested the most powerful engines the world had ever seen, capable of hurling massive vehicles out of the atmosphere.

Von Braun also tirelessly sought to fire the public's imagination and interest in spaceflight, delivering passionate, enthralling presentations in a variety of high-profile, public mediums -- from an historic series of visionary articles about future space travel in Collier's Weekly to thrilling documentary features for Walt Disney.

His crowning achievement came in November 1967, when the massive Saturn V rocket was successfully launched for the first time. A year later, this monument to human accomplishment would propel the first human voyage to the moon, and explorers would walk there for the first time on July 21, 1969.

In 1970, von Braun moved his family to Washington to lead strategic planning for the agency. He retired from NASA in 1972.

Von Braun died in Alexandria, Va., on June 16, 1977. That same year, the first space shuttle began flight tests. That successful, 30-year program -- and ongoing scientific study aboard the orbiting International Space Station, the realization of another of von Braun's early ideas -- carry on his remarkable legacy of ingenuity and invention.