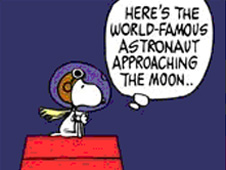 The Charles M. Schulz Museum in Santa Rosa, Calif., is celebrating the 40th anniversary of the Apollo 10 mission with an exhibition highlighting the connection between NASA's pioneering astronauts and Peanuts' barnstorming beagle.

In May 1969, Apollo 10 astronauts Gene Cernan, John Young and Thomas Stafford traveled all the way to the moon for one final checkout before the lunar landing attempt.


The astronauts carried paintings of the duo on their spacecraft, with Charlie Brown in space coveralls and Snoopy in his Flying Ace scarf. They used the paintings to calibrate the cameras used for the first live color telecasts from space.

Apollo 10 astronauts Cernan and Stafford will join recovery team members Chuck Smiley and Wes Chesser at the museum on Jan. 31 to kick off the exhibition. Also on hand: Jamye Flowers Coplin, a NASA secretary who was photographed giving the crew a special Snoopy send off. 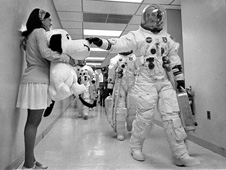 Headed for the launch pad, Apollo 10 commander Tom Stafford pats the nose of a stuffed Snoopy held by Jamye Flowers (Coplin), astronaut Gordon Cooper's secretary. Photo Credit: NASA
› Full Size Snoopy's connection with NASA actually began before Apollo 10. In 1968, NASA chose the beagle as an icon who would "emphasize mission success and act as a 'watchdog' for flight safety."

Established that same year, the agency's "Silver Snoopy Award" is considered the astronauts personal award, given for outstanding efforts that contribute to the success of human space flight missions. Award winners receive a sterling silver Snoopy lapel pin flown in space, along with a certificate and letter of appreciation from NASA astronauts. Fewer than 1% of the workforce is recognized with a Silver Snoopy annually, making it one of the most prized awards in the industry.

The exhibit will feature a one-third scale model of the Apollo command module from the Johnson Space Center, an Apollo-era flight suit, the actual image of Charlie Brown that was flown aboard Apollo 10, and a special children's area for creative play.

The exhibition runs through July 20, 2009. For more information, visit the Schulz Museum online.