Mercury astronaut Alan B. Shepard is depicted with the Redstone rocket and Mercury spacecraft he flew 50 years ago to become the first American in space. Image credit: USPS
› Larger image

The MESSENGER spacecraft is depicted in orbit around the planet Mercury. Image credit: USPS
› Larger image 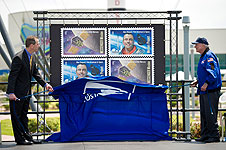 A young, grinning Alan Shepard adorns a new stamp released May 4 to celebrate the astronaut's history-making launch 50 years ago this week to become the first American in space. Shepard's flight of just 15 minutes on May 5, 1961 marked the first steps of a national effort that sent astronauts to the moon and back eight years later.

Opposite Shepard in the stamp set is a depiction of the MESSENGER spacecraft as it entered Mercury's orbit in March, the first spacecraft to orbit the planet closest to the sun. Together, the designs bookend a time span during which NASA launched some 1,500 missions, including unmanned probes to distant worlds and the edge of the solar system.

“These stamps, which will go out by the millions across this country, are a testament to the thousands of NASA men and women who shared dreams of human spaceflight and enlarging our knowledge of the universe,” said Charlie Bolden, NASA administrator and former astronaut during the stamps' unveiling at the Kennedy Space Center Visitor Complex in Florida. Both missions launched from Cape Canaveral Air Force Station adjacent to NASA's Kennedy Space Center.

"Today we celebrate the 50th anniversary of many, many important issues, among them is the first steps from the home planet that were taken by the family of man," said Scott Carpenter, one of the Mercury astronauts who, like Shepard, flew the one-man capsule into space.

Then-President John F. Kennedy set America on a course for the moon soon after Shepard's mission ended, even though the nation had not accomplished even a day's experience in space.

"That was largely a response to Alan's success," Carpenter told the crowd assembled at the Rocket Garden.

Shepard and Carpenter were two of seven test pilots chosen by NASA in April 1959 to form its first class of astronauts. Shepard was 38 at the time of his Mercury mission but did not fly again for 10 years when he commanded the Apollo 14 mission and walked on the moon. An inner ear condition called Meniere's Disease grounded the astronaut and he instead served as Chief of the Astronaut Office before surgery corrected his condition and he began training for the moon landing.

Little of Shepard's flight would be recognizable to those accustomed to watching space shuttles launch into space, construct a space station and then glide back to Earth. For example, Shepard was flying in a capsule that did not have a forward-facing window, but a periscope that he deployed a few minutes after liftoff. Shepard and his capsule splashed down in the Atlantic Ocean after descending under parachutes.

The Redstone rocket used a single engine to hurl Shepard and his "Freedom 7" Mercury capsule on a ballistic arc 116 miles into space and more than 300 miles from its launch pad. That single engine generated about 78,000 pounds of thrust. For comparison, the escape rocket on top of the Apollo/Saturn V produced nearly twice that of the whole Redstone.

"It's an impressive thing to think about how explorers and scientists have worked hand-in-hand," said Jim Adams, NASA's Deputy Director of Planetary Science. "As exploration and science work together in the future, we all look forward to what the future holds."

We have often walked among these rockets and marveled at their shapes and sizes. Americans should be so proud that America has been the leader in space exploration for 50 years.

"A decision was made not to put 44 cents on the stamp, but it is forever," Carpenter said. "It is appropriate to the time we should honor and remember Alan B Shepard and Freedom 7."

Donato Giancola of Brooklyn, N.Y., and Phil Jordon of Falls Church, Va., worked together on the stamp designs. Giancola has received dozens of awards for his illustrations of science fiction and fantasy books. The designs are based on NASA images.