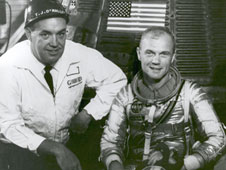 Thomas O'Malley, a legendary engineer responsible for launching the first American into orbit, died of pneumonia Nov. 6 in Cocoa Beach, Fla., at age 94.

Working for General Dynamics' Convair division, O'Malley played major roles in the conversion of the Atlas missile into a rocket safe enough for the first astronauts.

O'Malley is perhaps best known as the man who pushed the button to launch the Atlas rocket that carried astronaut John Glenn into orbit on Feb. 20, 1962. That was the first time an American orbited the Earth.

Later, North American Aviation called on O'Malley to help get the company's Apollo command module launch operations back on track following the Apollo 1 fire that killed three astronauts in 1967. The redesigned command module made its first flight safely in October 1968.

O'Malley also was instrumental in launch operations for Skylab, Apollo-Soyuz and the space shuttle as a vice president at North American, which became Rockwell International.

O'Malley was born Oct. 15, 1915, in Montclair, N.J. He graduated from the Newark College of Engineering in 1936 with a bachelor's in mechanical engineering. His first aviation job came at the Wright Aeronautical Corporation.