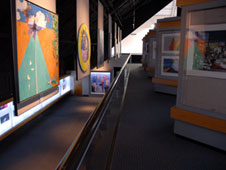 Many pieces of NASA's art collection are on display at the Kennedy Space Center Visitor Complex in Florida. The two-story gallery exhibits paintings, photographs and drawings, showcasing the different ways artists express what they see. Credit: NASA/Steven Siceloff


James Webb garnered tremendous praise for his management acumen as NASA’s administrator during the race to space and the moon. But along with setting a course for a clearly left-brained organization focused on engineering and inventing technology, Webb also gave NASA room for the right-brain to breathe a bit.

In 1962, Webb sent a two-paragraph memo that suggested involving artists to help tell the agency’s story of adventure.

That was all James Dean needed to start a program that would produce a bold catalog of almost 3,000 pieces of artwork during the course of NASA’s first 50 years.

Some of the pieces are utterly realistic scenes, such as the painting by Norman Rockwell that depicts Gemini astronauts Gus Grissom and John Young suiting up before launch. There’s a Mars landscape made inside the prototype wheel of one of the Mars rovers. Others are more abstract, including a black star made from the shredded rubber of a space shuttle tire to commemorate Columbia’s STS-107 mission.

"You could take seven or eight artists out, looking at the same launch, and each one would have a totally different point of view," Dean said. "Some would see it in an abstract, almost spiritual way, some would be totally realistic in their view and some would go so far beyond the physical launch."

Photographs show us how human eyes see a space launch, but it takes an artist to show us the different ways the mind sees, feels and reacts to such an event, Dean said in giving Webb credit for recognizing a need for different eyes to chronicle the agency’s exploits.

"That’s the beauty of art," said Bert Ulrich, curator of NASA’s art program. "That it reaches people in different ways. The idea is that art is another way to inspire people."

An artist also could bring something that engineers and managers loathe to admit to: emotion.

"Artists are really emotional types who can project themselves into it and really get a lot out of the experience," Dean said.

The first team of artists set off in time to see the last launch of the Mercury Program -- Gordon Cooper’s Faith 7 flight May 15, 1963. Most of the group stayed on land and watched from Cape Canaveral while another artist went out on the Navy ship that would recover Cooper and his spacecraft.

After the launch, the artists were free to create whatever work inspired them. Their pieces formed the core of NASA’s first exhibit at the National Gallery of Art in Washington, D.C.

For their efforts, each artist received an $800 honorarium. Travel costs had to come out of that total, as well.

There was enormous public interest though, so the agency never had trouble finding artists willing to take on the task.

"Artists share something with scientists and astronauts in that they are adventurers," Ulrich said. "Artists try to interpret the unknown and they do that with their imaginations."

The artists soon traveled to all of NASA’s facilities, recording events far from the launch site in mediums ranging from pencils and pens to watercolors and ink. Later, as the Space Shuttle Program was in full force, NASA enlisted musicians, poets and others for more variety. Patti LaBelle even recorded a space-themed song.

Norman Rockwell, Robert T. McCall, Andy Warhol and Annie Leibovitz are some of the well-known names to take part in the program, but, reaching out to the National Gallery’s expertise, the agency made sure to include up-and-coming artists, again, to encourage variety.

The biggest event for the program was the Apollo 11 mission in July 1969, Dean said. The first time humans would walk on the moon would be one of the most historic moments in history, so the roster of artists grew and their locations varied.

Some went to Mission Control at NASA’s Johnson Space Center in Houston, one went out on the aircraft carrier that picked up Neil Armstrong, Buzz Aldrin and Michael Collins from the Pacific Ocean and others went to NASA’s Kennedy Space Center in Florida to see the Saturn V rocket lift off. Dean accompanied the group to Kennedy.

"It was like the eighth wonder of the world to see that Saturn V illuminated in the night and to hear the alligators and the night birds and the insects," Dean said. "It was an incredible contrast."

The mission’s success and significance was not lost on the National Gallery either. The director called Dean soon after the moon landing and slated an exhibition of the work in November 1969, which was a much tighter timetable than artists are accustomed to.

"I called them up and said, 'We really have to get moving,' " Dean said. "We got some of the most beautiful artwork you’ve ever seen."

About 2,100 pieces from the art program now belong to the Smithsonian’s National Air and Space Museum, where some are on display. NASA’s collection numbers about 800, and many of those go on public viewing, while others can be seen at NASA field centers.

Don’t ask Dean or Ulrich to pick a favorite, it’s like asking a parent to name a favorite child.

"I think I could tell a story about every one (of the pieces)," Dean said.

Rockwell, for example, desperately wanted a spacesuit so he could get all the details in his painting of Grissom and Young suiting up for the Gemini 3 mission. But NASA officials refused on the grounds that there was a lot of secret technology in the suits and they couldn’t release one. Dean worked as the go-between, and it was not looking good.

"I had (Mercury astronaut) Deke Slayton mad at me on one side and Norman Rockwell aggravated at me on the other," Dean said.

The compromise was that a technician accompanied the suit up to Rockwell’s studio and sat with it every day as Rockwell worked. The technician’s reward was to be included in the piece as one of the people helping the astronauts.

Another artist was determined to sculpt a Saturn lifting off. The rocket was not a problem, but capturing the chaos of the smoke and flame reaching skyward was not easy in a sculpture. The solution: molten aluminum poured over a pile of potatoes. The aluminum cooked the potatoes and the artist scooped them out, leaving the outside aluminum in the rough shape of the pyramid of rocket exhaust.

Successful space artists were not always Earth-bound. Apollo astronaut and moonwalker Alan Bean has sketched and painted space scenes from firsthand knowledge of seeing the moon up close and orbiting above Earth. After retiring from NASA, Bean continues painting and incorporating his experiences into the works.

"Artists never quit," Dean said. "Even if they don’t sell a thing, they can’t stop."