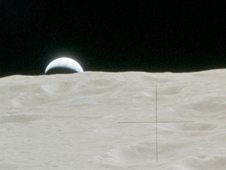 The seeds that later became moon trees orbited the moon 34 times in the Apollo 14 command module. In this classic Apollo 14 image, taken just before the lunar module landed at Fra Mauro, Earth peeks over the edge of the moon. Credit: NASA
› Larger image 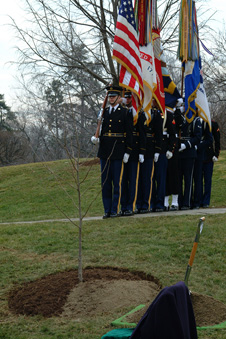 The moon tree planted at Arlington National Cemetery in Virginia in honor of astronaut Stuart Roosa during a dedication ceremony in 2005. Credit: NASA Goddard
› Larger image 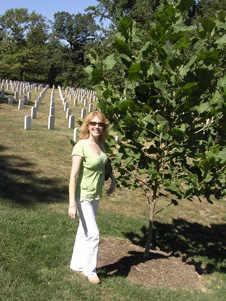 More recently, Rosemary Roosa, daughter of astronaut Stuart Roosa, stands next to the tree planted in honor of her father. Credit: Image courtesy of Rosemary Roosa
› Larger image In communities all across the U.S., travelers that went to the moon and back with the Apollo 14 mission are living out their quiet lives. The whereabouts of more than 50 are known. Many, now aging, reside in prime retirement locales: Florida, Arizona and California. A few are in the Washington, D.C., area. Hundreds more are out there -- or at least, they were. And Dave Williams of NASA's Goddard Space Flight Center in Greenbelt, Md., wants to find them before it's too late.

The voyagers in question are not astronauts. They're "moon trees" -- redwood, loblolly pine, sycamore, Douglas fir, and sweetgum trees sprouted from seeds that astronaut Stuart Roosa took to the moon and back 40 years ago.

"Hundreds of moon trees were distributed as seedlings," says Williams, "but we don't have systematic records showing where they all went."

And though some of the trees are long-lived species expected to live hundreds or thousands of years, others have started to succumb to the pressures of old age, severe weather and disease. At least a dozen have died, including the loblolly pine at the White House and a New Orleans pine that was damaged by Hurricane Katrina and later removed.

To capture the vanishing historical record, Williams, a curator at the National Space Science Data Center, has been tracking down the trees, dead or alive.

His sleuthing started in 1996, prompted by an email from a third-grade teacher, Joan Goble, asking about a tree at the Camp Koch Girl Scout Camp in Cannelton, Ind. A simple sign nearby read "moon tree."

"At the time, I had never heard of moon trees," Williams says. "The sign had a few clues, so I sent a message to the NASA history office and found more bits and pieces on the web. Then I got in touch with Stan Krugman and got more of the story."

Krugman had been the U.S. Department of Agriculture Forest Service's staff director for forest genetics research in 1971. He had given the seeds to Roosa, who stowed them in his personal gear for the Apollo 14 mission. The seeds were symbolic for Roosa because he had fought wildfires as a smoke jumper before becoming an Air Force test pilot and then an astronaut.

The seeds flew in the command module that Roosa piloted, orbiting the moon 34 times while astronauts Alan Shepard Jr. and Edgar Mitchell walked -- and in Shepard's case, played a little golf -- on the moon.

Back then, biologists weren't sure the seeds would germinate after such a trip. Few experiments of this kind had been done. A mishap during decontamination procedures made the fate of the seeds even less certain: the canister bearing the seeds was exposed to vacuum and burst, scattering its contents.

But the seeds did germinate, and the trees seemed to grow normally. At Forest Service facilities, the moon trees reproduced with regular trees, producing a second generation called half-moon trees.

By 1975, the trees were ready to leave the Forest Service nurseries. One was sent to Washington Square in Philadelphia to be the first moon tree planted as part of the United States Bicentennial celebrations; Roosa took part in that ceremony. Another tree went to the White House. Many more were planted at state capitals, historic locations and space- and forestry-related sites across the country. Gerald Ford, then the president, called the trees "living symbol[s] of our spectacular human and scientific achievements."

When Williams could find no detailed records of which trees went where, he created a webpage to collect as much information as possible. A flurry of emails came in from people who either knew of or came upon the trees.

"About a year after I put the webpage up, someone contacted me and asked why I didn't have the moon tree at Goddard listed," he says. "I hadn't known it was there!" Goddard's moon tree is a sycamore, planted in 1977 next to the visitors' center.

Williams has so far listed trees in 22 states plus Washington, D.C., and Rio Grande do Sul, Brazil. In many cases, the trees' extraordinary pedigrees were recorded on plaques or in newspaper clippings commemorating the event. Whenever possible, Williams has posted photos of the trees.

Second-generation moon trees, also tracked by Williams, continue to be planted. On Feb. 9, 2005, the 34th anniversary of the Apollo 14 splashdown, a second-generation sycamore was dedicated at Arlington National Cemetery "in honor of Apollo astronaut Stuart A. Roosa and the other distinguished Astronauts who have departed our presence here on earth." At the invitation of Roosa’s family, both Williams and a group of students from Cannelton attended the ceremony.

Another sycamore was planted at the U.S. National Arboretum in Washington, D.C., on April 22 (Earth Day), 2009. And on Feb. 3, 2011, one was planted in Roosa's honor at the Infinity Science Center, which is under construction at NASA's Stennis Space Center in Mississippi.

Rosemary Roosa, the astronaut's daughter, attended the Stennis ceremony. Her father, she says, was a strong supporter of science and space exploration, and she hopes the trees will serve as a reminder of the accomplishments of the U.S. space program as well as an inspiration to "reach for the stars."

People who know of the special legacy of the trees periodically check on them and contact Williams if a tree gets sick or knocked down by a storm. "Sometimes, I get an email from someone who went to the site where the tree used to be, and it's just gone," he says. "There's no sign of it, and we don't know what happened."

"I think when people are aware of the heritage of the trees, they usually take steps to preserve them," Williams adds, recalling one tree that was nearly knocked down during a building renovation. "But sometimes people aren't aware. That's why we want to locate as many as we can soon. We want to have a record that these trees are -- or were -- a part of these communities, before they're gone."