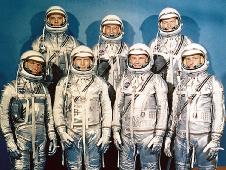 NASA introduced the Project Mercury Astronauts to the world on April 9, 1959, only six months after the agency was established.
Credit: NASA
View larger image After a rigorous search for America’s first astronauts, seven military test pilots (three Navy, three Air Force and one Marine) were finally chosen: Alan Shepard, Gus Grissom, John Glenn, Scott Carpenter, Wally Schirra, Gordon Cooper, and Deke Slayton. These men would come to be known as the Mercury 7 and would lead their country into the new, uncharted territory of space flight. They were first announced to the world on April 9, 1959, and were then expected to report to the Langley Space Task Group to begin their training program only a few short weeks later, on April 27. This training was intended to provide the new astronauts with an education in astronautics and space biology, conditioning for space flight, training in the operation of the new Mercury vehicle, familiarization with ground operations, and aviation flight training. It was also intended to allow the astronauts to participate in the development plan for the Mercury program. The first training week went as follows: Monday, April 27, check in; April 28, general briefing; April 29, spacecraft configuration and escape methods; April 30, support and restraint; May 1, operational concepts and procedures. These lectures were presented by specialists in each particular field of study. Additionally, unscheduled activities for the astronauts involved 3 hours of flying time and 4 hours of athletics. In only 3 months, thanks to such a thorough training regime, the first astronauts were well-acquainted with the Mercury program.