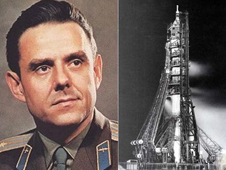 Colonel Vladimir Komarov and Soyuz 1. On April 23, 1967, Colonel Vladimir Komarov launched aboard Soyuz 1, the first flight of the Soyuz spacecraft. On April 24, 1967, Komarov was killed when the spacecraft crashed during its return to Earth. This was the first in-flight fatality in the history of human spaceflight. This tragedy was a scant three months after the Apollo 1 accident that occurred on Jan. 27, 1967, in which astronauts Gus Grissom, Edward White and Roger Chaffee lost their lives when a fire swept through the command module during preflight testing.

“We are very saddened by the loss of Col. Komarov. We feel comradeship for this test pilot because we have met several of his fellow cosmonauts and we know that we are all involved in a pioneering flight effort that is not without hazard. We particularly want to express our deep sense of sympathy to Mrs. Komarov, their children and his fellow cosmonauts.”