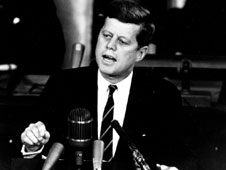 President Kennedy speaks to Congress on May 25, 1961. Photo Credit: NASA

› Kennedy Center Concert, May 25 NASA is once again charting a new course to extend humanity's presence into the solar system, developing a new heavy lift rocket and crew capsule to take astronauts beyond low-Earth orbit.

This journey into the future has its foundations 50 years in the past, when President John F. Kennedy issued a challenge that transformed the tentative early steps of human spaceflight into a giant leap for mankind.

In just a short six weeks in the spring of 1961, a trio of dramatic events set the stage for our first journey to another world: Soviet Yuri Gagarin's first human spaceflight on April 12, was followed on May 5 by Alan Shepard's first American flight. Then, on May 25, 1961, President Kennedy went to Congress for an address on "Urgent National Needs."

Kennedy told Congress and the nation that "space is open to us now," and said that space exploration "may hold the key to our future here on Earth." Then he issued an audacious challenge to NASA that seemed unthinkable after just a single U.S. spaceflight:

"I believe that this nation should commit itself to achieving the goal, before this
decade is out, of landing a man on the moon and returning him safely to Earth."


Watch: President Kennedy Puts NASA on a Path to the Moon:

The path wasn't always a smooth one, as heard in audio just released from the Kennedy library of a conversation between the President and then-NASA Administrator James Webb. The meeting, held in the White House on September 18, 1963, reveals President Kennedy's private concerns over waning public support for space exploration.
› Read Transcript and Download Audio→

But NASA and the nation persevered, and we eventually fulfilled Kennedy's goal on July 20, 1969, when Apollo 11's lunar module Eagle  touched down in the Sea of Tranquility, with Neil Armstrong and Buzz Aldrin aboard (› Interactive Feature: Apollo 11). A dozen men would walk on the moon before the Apollo program ended in 1972.

Now, we stand at a moonshot moment once again, with 50 years of accomplishment to build on. NASA planners and engineers are already working new capabilities to take us farther into the solar system and help us learn even more about our place in it.

NASA's Plans For the Future:


We will use the recently completed International Space Station as a test bed and stepping stone for the challenging journey ahead. We are changing the way we do business, fostering a commercial industry that will safely service low Earth orbit so we can focus our energy and resources on sending astronauts to an asteroid and eventually to Mars.

All the while, NASA continues to invest in science missions that study our earth, solar system and beyond, as well as aeronautics research focused on increased safety and reduced economic impact. We're also focused on educating the next generation of technology leaders and investing in high payoff, high-risk technology that industry cannot tackle today.

Later in his speech, President Kennedy said that "this nation will move forward, with the full speed of freedom, in the exciting adventure of space."