INTERACTIVE:
An interactive online feature about the Mercury program and Glenn's flight is available.
› Friendship 7: Celebrating 50 Years of American Spaceflight 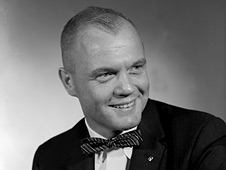 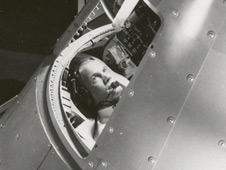 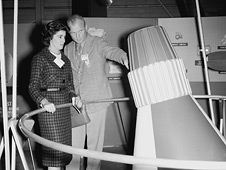 John Glenn explains a feature of the Mercury capsule to his wife, Annie, during one of her visits to NASA Langley in 1959. Credit: NASA

Or as author Tom Wolfe put it, they had "The Right Stuff."

They were the original Mercury seven astronauts, all chosen from a pool of military test pilots. It was 50 years ago -- on Feb., 20, 1962 -- that one of them, John Glenn, became the first American to orbit the Earth.

The group started their journeys into space at NASA Langley with the formation of the Space Task Group, which stayed in Hampton until June, 1962.

Six of the seven, except for Glenn, moved with their families to Hampton Roads. Glenn stayed in military quarters at Langley Air Force Base and commuted home to northern Virginia on weekends, according to Jim Hansen, the author of "Spaceflight to Revolution, NASA Langley Research Center from Sputnik to Apollo."

Scallion remembers working with Glenn and the others during spaceflight training and simulations.

"You could tell John Glenn to do anything and he'd do it right," said Scallion, "There's a picture of him up on some pedestal waving in a spacesuit. Actually he was waving at me when I was leaving, after making him sit in that capsule in the trainer for four and a half hours."

Glenn and the rest of the astronauts' preparation at Langley "included a rigorous regimen of physical exercise, including skin-diving operations designed to simulate weightlessness and the kind of sensory disorientation that they might experience during reentry from space," wrote Hansen.

Retired Langley photographer Fred Jones was on board an aircraft carrier in the Atlantic Ocean to record Glenn's historic splashdown. He recalls the capsule overshot its expected landing site and he missed the historic shot, But Jones says he did get pictures of Glenn on the destroyer that picked him up.

Jones had spent a fair amount of time with the Mercury seven, documenting their stay at NASA Langley. "They were test pilots, typical pilots," said Jones. "They never had a problem having their picture taken."

He does remember Glenn being a little different than many of the others. "He was kind of quiet," said Jones.

But John Glenn's record as a World War II and Korean War Marine combat pilot, the first American to orbit to earth, a U.S. Senator and finally the most senior astronaut to fly on the space shuttle speaks volumes about his achievements.