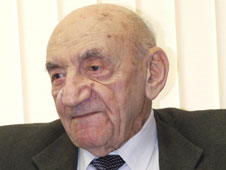 "We share the loss of Boris Chertok with our Russian colleagues," said Bill Gerstenmaier, NASA associate administrator for Human Exploration and Operations. "He was he a spaceflight pioneer and an inspiration to everyone associated with spaceflight. I remember him coming into the control center in Moscow in the middle of the night at the age of 97. He was an inspiration to every flight controller in Moscow. I also remember fondly sitting in Korolev's apartment in Moscow, now a museum, and having Boris describe meetings with Korolev, the general designer, at his kitchen table. The passion in Boris' eyes and voice gave me a unique insight into the Russian team and operations. Boris's speech this year at the 50th anniversary of Gagarin's flight was amazing and awe inspiring. His books and memoirs are a true treasure. He was a friend of NASA and he will be missed. His spirit will live on in the hearts of the Russian and American human spaceflight team."

Born in 1912 in Poland, Academician Chertok began his career as an electrician in Moscow before joining the aircraft design bureau of Viktor Bolkhovitinov. In 1946, he joined the newly established NII-88 institute as head of the control systems department and worked hand-in-hand with famed Chief Designer Sergey Korolev. Chertok became one of Korolev's closest aides in developing control systems for ballistic missiles and spacecraft, eventually becoming deputy chief designer of the famous OKB-1, the design organization that spun off from NII-88 in 1956 and was responsible for a remarkable string of space firsts of the early Soviet space program. Chertok participated in every major project at OKB-1, now the S.P. Korolev Rocket and Space Corporation Energia, until his retirement from active work in 1991. Among his many contributions to the Russian space industry, he was closely involved in the launch of the world's first satellite, Sputnik, on October 4, 1957 and the first human spaceflight by Yuri Gagarin on April 12, 1961.

Following his retirement, Chertok served as a senior consultant at RSC-Energia and published a series of memoirs, "Rockets and People," chronicling the history of the Russian space program. NASA has been completing an English translation of “Rockets and People.” The fourth and final volume of the series is expected to be published in early 2012.