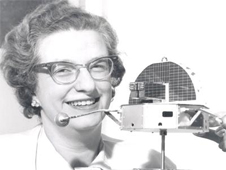 University of Chicago-trained astronomer not only led ran NASA’s fledgling astronomy program, but also provided leadership for NASA’s first successful astronomical mission, the Orbiting Solar Observatory-1, which was launched in March 1962. She then led the planning and oversaw missions as diverse as geodetic satellites, the three Orbiting Astronomical Observatories, including Copernicus, which gave astronomers their first opportunity to make long-term observations unimpeded by Earth’s atmosphere. Dr. Roman also oversaw the the Infrared Astronomical Satellite (IRAS).

From NASA’s infancy onward, Roman strongly advocated astronomer Lyman Spitzer’s concept for placing a large observatory in space, an idea that eventually became the Hubble Space Telescope. The road from Spitzer’s concept, first presented in 1946, to the launch of Hubble in 1990 was long and arduous. Roman worked patiently with the scientific community to make realistic plans for the Hubble, with a 2.4-meter telescope, which was smaller than what many astronomers wanted. When the Hubble finally launched and initially suffered optics problems that were subsequently repaired, Roman said “I wondered had I really oversold the Hubble. I have to admit that since, I have been convinced that I didn’t.”

In her career, Roman also was asked to brief members of the astronaut corps, including the Apollo 11 crew, about astronomy related to their missions. “I told them that they would have a much darker sky, that they’d be able to see much fainter stars than they could see from the ground, and of course, that they could see the southern stars as well as the northern stars,” she recalls. She later worked with the three Skylab crews, whose missions included stellar and related observations.