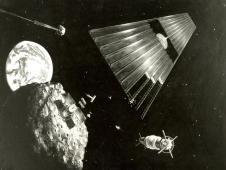 This artist's concept from 1978 shows a mission to an asteroid. (NASA)
View larger image 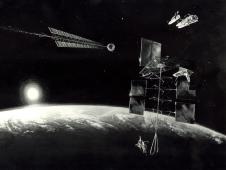 This painting depicts a mission to an Earth-approaching asteroid. (NASA)
View larger image Within NASA’s FY2014 budget proposal lies a project to relocate and go to an asteroid. This project would be the first to capture a small near-Earth asteroid and safely redirect it to a lunar orbit so that astronauts can visit and explore it. Such a mission would expand scientific knowledge of the origins of both humanity and the universe.

The goal of understanding more about asteroids and visiting them is not a new endeavor for NASA. In fact, the idea dates to the earliest days of the agency. In a 1964 document that looked at “long range future mission planning,” NASA expressed an early aspiration to visit asteroids through unmanned probes by the end of the 1970s. NASA did indeed send a probe through the asteroid belt early in that decade – Pioneer 10 safely traversed the Belt on its way to Jupiter in 1972. By 1969, according to a “Five Year Plan” laid out by the Office of Manned Space Flight, NASA was already looking at plans to send crewed missions to asteroids. However, at the time, the then-latest technology was insufficient to pursue this goal. NASA administrator Robert A. Frosch mentioned this in testimony to Congress on July 29, 1980, when he explained that “a number of evolutionary stages of technology development would be required” for such missions, including “asteroid retrieval to Earth.” Although the capabilities did not yet exist, it is noteworthy that the NASA administrator himself was publicly discussing the idea of asteroid retrieval in 1980. Relocating an asteroid was not just a pipe dream in the minds of a few NASA scientists!

Over the next two decades NASA continued studies and technology development work that would facilitate the capture and exploration of asteroids. In 1992, NASA sponsored a “Near-Earth-Object Interception Workshop” in Los Alamos, New Mexico. At this workshop, those present discussed a “space-based fabrication of very large, microlayer solar sails for asteroid retrieval.” Also discussed was the idea that “such capabilities clearly depend on much expanded human operations in space.” More recently, the International Space Station, has allowed NASA and its international partners to both complete a great deal of research on how to live and work in space, and also to explore long-duration human space flight and its effects on astronauts.

Since the dawn of the new millennium, NASA has also sent several missions to explore asteroids. Multiple probes have completed flybys of asteroids on their way to other planets, and two missions have launched specifically to study asteroids. NEAR (Near Earth Asteroid Rendezvous)-Shoemaker became the first spacecraft to orbit and touch down on an asteroid when it reached the asteroid Eros in 2000 and descended to its surface in 2001, and in July 2011, the Dawn spacecraft became the first probe to enter orbit around an object in the main asteroid belt when it reached the asteroid Vesta. Having completed its investigation of Vesta, Dawn is now on its way to our solar system’s largest asteroid, Ceres.

Thus, NASA’s new asteroid initiative is deeply rooted in the storied past of the agency. Thanks to many years of planning and recent technology developments, NASA now has the capability to accelerate current programs that are working on high-powered solar electric propulsion. This, alongside our work on the Space Launch System launch vehicle and the Orion spacecraft, will help us achieve a goal first imagined in the 1960s of sending astronauts to explore an asteroid.