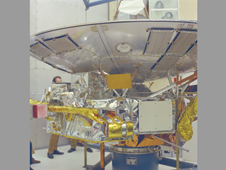 Pioneer 10 was managed by NASA Ames Research Center, Moffett Field, Calif. and constructed by TRW, Inc. Launched on March 2,1972, it was the first spacecraft to travel through the Asteroid belt, and the first spacecraft to make direct observations and obtain close-up images of Jupiter. Famed as the most remote object ever made through most of its mission, Pioneer 10 traveled more than 8 billion miles through space in 25 years. (On Feb. 17, 1998, Voyager 1's heliocentric radial distance equaled Pioneer 10 at 69.4 AU and thereafter exceeded Pioneer 10 at the rate of 1.02 AU per year.) Pioneer 10, on its 40th anniversary, is now 11 billion miles into deep space.

“These days, when deep space missions routinely succeed, it is hard to realize the excitement felt at the launch of Pioneer 10 forty years ago,” said Larry Lasher, Pioneer’s project manager. Facing the uncertainty of surviving the asteroid belt - that region of dust, rocks, and debris between Mars and Jupiter – and the intense radiation of Jupiter, it was far from certain that Pioneer 10 would be successful. Now forty years later having completed its mission, Pioneer 10 drifts into interstellar space carrying a plaque designed to inform intelligent life who may find it about the spacecraft and its origin. Long live Pioneer!”

Pioneer 10 made its closest encounter to Jupiter on Dec. 3, 1973, passing within 81,000 miles of the cloudtops. This historic event marked humans' first approach to Jupiter and opened the way for exploration of the outer solar system - for Voyager to tour the outer planets, for Ulysses to break out of the ecliptic, for Galileo to investigate Jupiter and its satellites, for Cassini to go to Saturn and probe Titan, and for the New Horizons mission to Pluto. During its Jupiter encounter, Pioneer 10 imaged the planet and its moons, and took measurements of Jupiter's magnetosphere, radiation belts, magnetic field, atmosphere, and interior. These measurements of the intense radiation environment near Jupiter were crucial in designing the Voyager and Galileo spacecraft.

Pioneer 10 made valuable scientific investigations in the outer regions of our solar system until the end of its science mission on March 31,1997. Pioneer 10’s weak signal continued to be tracked by the Deep Space Network (DSN) as part of an advanced concept study of communication technology supporting NASA's future interstellar probe mission.

The venerable Pioneer 10 spacecraft sent its last, very weak signal to Earth received Jan. 23, 2003. The power source on Pioneer 10 finally degraded to the point where its signal to Earth dropped below the threshold for detection.

Pioneer 10 will continue to coast silently as a ghost ship through deep space into interstellar space, heading generally for the red star Aldebaran, which forms the eye of Taurus (The Bull). Aldebaran is about 68 light years away and it will take Pioneer more than 2 million years to reach it.

For more information about the Pioneer Project History, visit: