'Tipping Points' High-Resolution Multimedia for the 2007 AGU Press Event
Item No. 1: Earth's Energy is Out of Balance 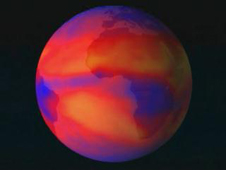 Scientists have concluded that more energy is being absorbed from the sun than is emitted back to space, throwing the Earth's energy "out of balance" and warming the globe. Heat energy radiated from the Earth is shown here in shades of yellow, red, blue and white. The brightest yellow areas, such as the Sahara Desert, are emitting the most energy out to space, while the dark blue polar regions and bright white clouds are the coldest areas on Earth, and are emitting the least energy. 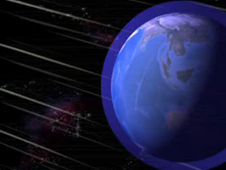 Only about 70% of the solar energy that reaches Earth is absorbed, while the remaining 30% is reflected back into space by atmosphere and aerosols, ocean/land and clouds. There is a delicate balance between absorption and reflection as well as a release of energy by rocks, air and sea, warming and emitting increasing amounts of thermal radiation (heat) in the form of long-wave infrared light. This radiation allows Earth to lose heat at the same rate it gains from the Sun. When these rates change disproportionately, an imbalance occurs. 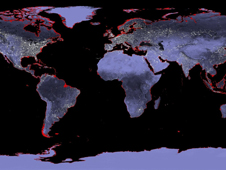 One potential climate tipping point is the response of sea level to changes in the Greenland and Antarctic ice sheets. Melting of the ice sheets adds liquid water to the oceans and raises global sea level. Although researchers are working to develop numerical models that will narrow down exactly how fast and how much the ice will melt, development of these models may take more than a decade. This image shows in red, areas that would experience flooding due to a one-meter rise in sea level, which is not significantly beyond the range that many scientists expect could happen by the end of this century. 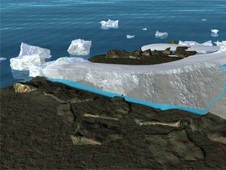 In order to accurately predict sea level rise, scientists need to understand how ice sheets respond to warming. The following conceptual animations show the complexity of this response as ice sheets grow in the middle and shrink at the edges. As melt water collects on the surface of the ice in summer, it travels down through crevasses and lubricates the underlying rock, causing acceleration of ice towards the sea. 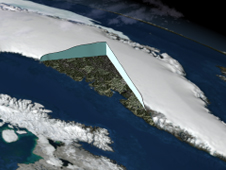 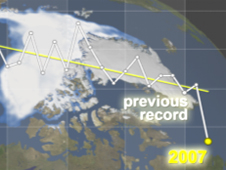 At the end of each summer, the sea ice cover reaches its minimum extent and the ice that remains is called the perennial ice cover, which consists mainly of thick multi-year ice floes. The area of the perennial ice has been steadily decreasing since the satellite record began in 1979, at a rate of about 10% per decade. But the 2007 minimum, reached around Sept. 14, is far below the previous record made in 2005 and is about 38% lower than the climatological average. This data visualization shows the annual sea ice minimum from 1979 through 2007. 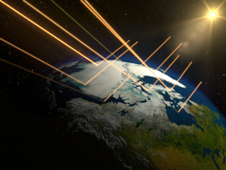 Polar ice reflects light from the sun. As this ice begins to melt, less sunlight gets reflected into space. It is instead absorbed into the oceans and land, raising the overall temperature, and fueling further melting. This results in a positive feedback loop called ice albedo feedback, which causes the loss of the sea ice to be self-compounding. The more it disappears, the more likely it is to continue to disappear, as shown in the following conceptual animation. 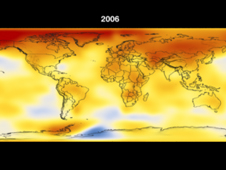 The Earth has been warming approximately 0.2 degrees Celsius per decade for the past 30 years. This rapid warming has brought global temperature to within about one degree Celsius of the maximum estimated temperature during the past million years, when sea level was about 25 meters higher than today. This data visualization shows global temperature from 1880 to 2006. Note how polar temperatures have risen higher and faster than the rest of the globe.

Credit: NASA
› Back To Top