Arctic Sea Ice Reaches Lowest Coverage for 2008
Arctic sea ice coverage appears to have reached its lowest extent for the year and the second-lowest amount recorded since the dawn of the satellite era, according to observations from the NASA-supported National Snow and Ice Data Center at the University of Colorado in Boulder. 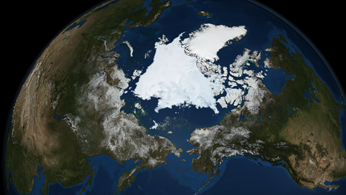 Image above: (Click for enlargement.) The Advanced Microwave Scanning Radiometer (AMSR-E) is a high-resolution passive microwave Instrument on NASA’s Aqua satellite. AMSR-E provides a remarkably clear view of sea ice dynamics in greater detail than has ever been seen before. Researchers use this information to study polar bear habitats, plan expeditions to the ice, and to study the interactions between the ocean and sea ice from season to season. This data visualization shows Arctic sea ice from July 1 to Sept. 10, 2008. View animation. Credit: NASA/Goddard Space Flight Center Scientific Visualization Studio; Blue Marble Next Generation data courtesy Reto Stockli (NASA/GSFC)

While slightly above the record-low minimum set Sept. 16, 2007, this season further reinforces the strong negative trend in summer sea ice extent observed during the past 30 years. Before last year, the previous record low for September was 2005.

In March, when the Arctic reached its annual maximum sea ice coverage during the winter, scientists from NASA and the data center reported that thick, older sea ice was continuing to decline. According to NASA-processed satellite microwave data, this perennial ice used to cover 50-60 percent of the Arctic, but this winter it covered less than 30 percent. Perennial sea ice is the long-lived layer of ice that remains even when the surrounding short-lived seasonal sea ice melts to its minimum extent during the summer.

NASA scientists have been observing Arctic sea ice cover since 1979. NASA developed the capability to observe the extent and concentration of sea ice from space using passive microwave sensors. 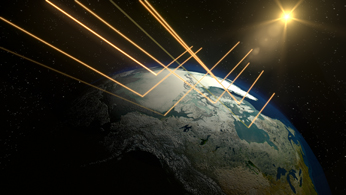 Image above: (Click for enlargement.) Polar ice reflects light from the sun. As this ice begins to melt, less sunlight gets reflected into space. It is instead absorbed into the oceans and land, raising the overall temperature, and fueling further melting. This results in a positive feedback loop called ice albedo feedback, which causes the loss of the sea ice to be self-compounding. The more it disappears, the more likely it is to continue to disappear. View animation. Credit: NASA/Goddard Space Flight Center Conceptual Image Lab

The National Snow and Ice Data Center will issue an analysis of the possible causes behind this year's Arctic sea ice conditions during the first week of October. For updates, visit http://nsidc.org/arcticseaicenews.
› Back To Top