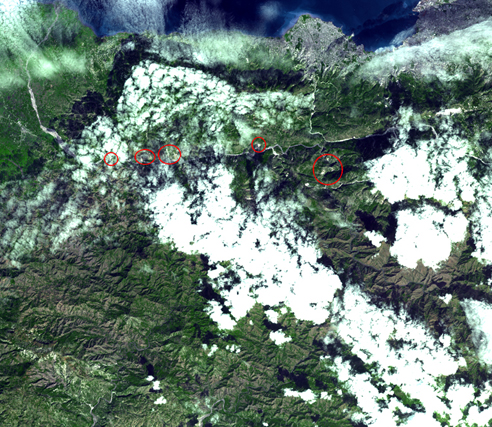 > Click for larger image
The Advanced Spaceborne Thermal Emission and Reflection Radiometer (ASTER) instrument on NASA’s Terra spacecraft captured this simulated natural color image of the Port-au-Prince, Haiti, area, Jan. 14, 2010, two days after a magnitude 7.0 earthquake struck the region and caused massive damage and loss of life. While ASTER's 15-meter (50-foot) resolution is not sufficient to see damaged buildings, it can be used to identify other results of the shaking. The red circles superimposed on the image indicate possible landslides, a common occurrence in mountainous terrain after large earthquakes. The possible landslides were identified by carefully comparing the new image with an image acquired one year previously.

The ASTER instrument was provided by Japan's Ministry of Economy, Trade, and Industry (METI) under a cooperative agreement with NASA.

For more information on this image, visit http://photojournal.jpl.nasa.gov/catalog/PIA12495.