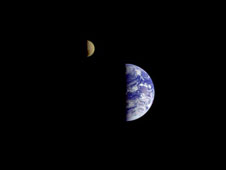 On December 16, 1992, 8 days after its encounter with Earth, the Galileo spacecraft looked back from a distance of about 6.2 million kilometers (3.9 million miles) to capture this remarkable view of the Moon in orbit about Earth. Image credit: NASA/JPL There apparently is a great deal of interest in celestial bodies, and their locations and trajectories at the end of the calendar year 2012. Now, I for one love a good book or movie as much as the next guy. But the stuff flying around through cyberspace, TV and the movies is not based on science. There is even a fake NASA news release out there… So here is the scientific reality on the celestial happenings in the year 2012.

Nibiru, a purported large object headed toward Earth, simply put - does not exist. There is no credible evidence - telescopic or otherwise - for this object's existence. There is also no evidence of any kind for its gravitational affects upon bodies in our solar system.

I do however like the name Nibiru. If I ever get a pet goldflish (and I just may do that sometime in early 2013), Nibiru will be at the top of my list.

There are no credible predictions for worrisome astronomical events in 2012. The activity of the sun is cyclical with a period of roughly 11 years and the time of the next solar maximum is predicted to occur in the period 2010 – 2012. However, the Earth routinely experiences these periods of increased solar activity – for eons - without worrisome effects. The Earth’s magnetic field, which deflects charged particles from the sun, does reverse polarity on time scales of about 400,000 years but there is no evidence that a reversal, which takes thousands of years to occur, will begin in 2012. Even if this several thousand year-long magnetic field reversal were to begin, that would not affect the Earth’s rotation nor would it affect the direction of the Earth’s rotation axis… only Superman can do that.

The only important gravitational tugs experienced by the Earth are due to the moon and sun. There are no planetary alignments in the next few decades, Earth will not cross the galactic plane in 2012, and even if these alignments were to occur, their effects on the Earth would be negligible. Each December the Earth and Sun align with the approximate center of the Milky Way Galaxy but that is an annual event of no consequence.

The predictions of doomsday or dramatic changes on December 21, 2012 are all false. Incorrect doomsday predictions have taken place several times in each of the past several centuries. Readers should bear in mind what Carl Sagan noted several years ago; "extraordinary claims require extraordinary evidence."

For any claims of disaster or dramatic changes in 2012, the burden of proof is on the people making these claims. Where is the science? Where is the evidence? There is none, and all the passionate, persistent and profitable assertions, whether they are made in books, movies, documentaries or over the Internet, cannot change that simple fact. There is no credible evidence for any of the assertions made in support of unusual events taking place in December 2012.

For more information on the silliness surrounding December 2012, see:
Written by Don Yeomans, NASA senior research scientist
› Back To Top