This time series from the ozone "World Avoided" model shows the concentration of ozone over the South Pole at four key times. Reds represent normal to high concentrations; blues show depleted areas. The discovery that CFCs deplete ozone was first announced in 1974, when the ozone layer was still relatively robust. By 1989, an "ozone hole" had opened over Antarctica, peaking in size in 2006. By year 2054 in the model, the ozone hole is permanent, and global ozone has dropped by 67 percent. Credit: NASA Goddard's Scientific Visualization Studio
> Larger images 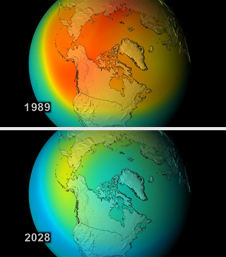 The ozone layer over the far northern hemisphere -- once relatively robust compared to the Antarctic concentrations -- would have developed a similar ozone hole by the 2020s if the Montreal Protocol had not limited ozone-depleting substances. Credit: NASA Goddard's Scientific Visualization Studio
> Larger images 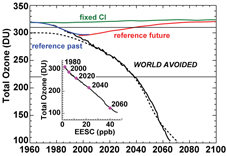 Annual average concentrations of global ozone are shown for the "World Avoided" (solid black), a modeled future with ozone regulation (red), atmospheric chlorine at a fixed amount (green), and a simulation of past observations (blue). The inset shows how ozone concentrations decrease as the amount of chlorine in the atmosphere -- effective equivalent stratospheric chlorine (EESC) -- grows over time. Credit: NASA/Paul Newman, et. al.; published in Atmospheric Chemistry and Physics
> Larger image 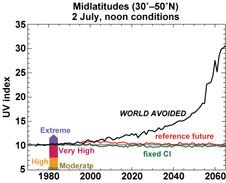 The summer ultraviolet (UV) index -- used to alert people to the intensity of sun-burning radiation at the peak of the day -- triples as ozone is depleted in the "world avoided" scenario. Credit: NASA/Paul Newman, et. al.; published in Atmospheric Chemistry and Physics
> Larger image The year is 2065. Nearly two-thirds of Earth's ozone is gone -- not just over the poles, but everywhere. The infamous ozone hole over Antarctica, first discovered in the 1980s, is a year-round fixture, with a twin over the North Pole. The ultraviolet (UV) radiation falling on mid-latitude cities like Washington, D.C., is strong enough to cause sunburn in just five minutes. DNA-mutating UV radiation is up 650 percent, with likely harmful effects on plants, animals and human skin cancer rates.

Such is the world we would have inherited if 193 nations had not agreed to ban ozone-depleting substances, according to atmospheric chemists at NASA's Goddard Space Flight Center, Greenbelt, Md., Johns Hopkins University, Baltimore, and the Netherlands Environmental Assessment Agency, Bilthoven.

Led by Goddard scientist Paul Newman, the team simulated "what might have been" if chlorofluorocarbons (CFCs) and similar chemicals were not banned through the treaty known as the Montreal Protocol. The simulation used a comprehensive model that included atmospheric chemical effects, wind changes, and radiation changes. The analysis has been published online in the journal Atmospheric Chemistry and Physics.

"Ozone science and monitoring has improved over the past two decades, and we have moved to a phase where we need to be accountable," said Newman, who is co-chair of the United Nations Environment Programme's Scientific Assessment Panel to review the state of the ozone layer and the environmental impact of ozone regulation. "We are at the point where we have to ask: Were we right about ozone? Did the Montreal Protocol work? What kind of world was avoided by phasing out ozone-depleting substances?"

Ozone is Earth's natural sunscreen, absorbing and blocking most of the incoming UV radiation from the sun and protecting life from DNA-damaging radiation. The gas is naturally created and replenished by a photochemical reaction in the upper atmosphere where UV rays break oxygen molecules (O2) into individual atoms that then recombine into three-part molecules (O3). As it is moved around the globe by upper level winds, ozone is slowly depleted by naturally occurring atmospheric gases. It is a system in natural balance.

But chlorofluorocarbons -- invented in 1928 as refrigerants and as inert carriers for chemical sprays -- upset that balance. Researchers discovered in the 1970s and 1980s that while CFCs are inert at Earth's surface, they are quite reactive in the stratosphere (10 to 50 kilometers altitude, or 6 to 31 miles), where roughly 90 percent of the planet's ozone accumulates. UV radiation causes CFCs and similar bromine compounds in the stratosphere to break up into elemental chlorine and bromine that readily destroy ozone molecules. Worst of all, such ozone depleting substances can reside for several decades in the stratosphere before breaking down.

In the 1980s, ozone-depleting substances opened a wintertime "hole" over Antarctica and opened the eyes of the world to the effects of human activity on the atmosphere. By 1987, the World Meteorological Organization and United Nations Environment Program had brought together scientists, diplomats, environmental advocates, governments, industry representatives, and non-governmental organizations to forge an agreement to phase out the chemicals. In January 1989, the Montreal Protocol went into force, the first-ever international agreement on regulation of chemical pollutants.

“The regulation of ozone depleting substances was based upon the evidence gathered by the science community and the consent of industry and government leaders," Newman noted. "The regulation pre-supposed that a lack of action would lead to severe ozone depletion, with consequent severe increases of solar UV radiation levels at the Earth’s surface."

In the new analysis, Newman and colleagues "set out to predict ozone losses as if nothing had been done to stop them." Their "world avoided" simulation took months of computer time to process.

The team started with the Goddard Earth Observing System Chemistry-Climate Model (GEOS-CCM), an earth system model of atmospheric circulation that accounts for variations in solar energy, atmospheric chemical reactions, temperature variations and winds, and other elements of global climate change. For instance, the new model accounts for how changes in the stratosphere influence changes in the troposphere (the air masses near Earth's surface). Ozone losses change the temperature in different parts of the atmosphere, and those changes promote or suppress chemical reactions.

The researchers then increased the emission of CFCs and similar compounds by 3 percent per year, a rate about half the growth rate for the early 1970s. Then they let the simulated world evolve from 1975 to 2065.

By the simulated year 2020, 17 percent of all ozone is depleted globally, as assessed by a drop in Dobson Units (DU), the unit of measurement used to quantify a given concentration of ozone. An ozone hole starts to form each year over the Arctic, which was once a place of prodigious ozone levels.

By 2040, global ozone concentrations fall below 220 DU, the same levels that currently comprise the "hole" over Antarctica. (In 1974, globally averaged ozone was 315 DU.) The UV index in mid-latitude cities reaches 15 around noon on a clear summer day (a UV index of 10 is considered extreme today.), giving a perceptible sunburn in about 10 minutes. Over Antarctica, the ozone hole becomes a year-round fixture.

In the 2050s, something strange happens in the modeled world: Ozone levels in the stratosphere over the tropics collapse to near zero in a process similar to the one that creates the Antarctic ozone hole.

"Our world avoided calculation goes a little beyond what I thought would happen," said Goddard scientist and study co-author Richard Stolarski, who was among the pioneers of atmospheric ozone chemistry in the 1970s. "The quantities may not be absolutely correct, but the basic results clearly indicate what could have happened to the atmosphere. And models sometimes show you something you weren't expecting, like the precipitous drop in the tropics."

"We simulated a world avoided," said Newman, "and it's a world we should be glad we avoided."

The real world of CFC regulation has been somewhat kinder. Production of ozone-depleting substances was mostly halted about 15 years ago, though their abundance is only beginning to decline because the chemicals can reside in the atmosphere for 50 to 100 years. The peak abundance of CFCs in the atmosphere occurred around 2000, and has decreased by roughly 4 percent to date.

Stratospheric ozone has been depleted by 5 to 6 percent at middle latitudes, but has somewhat rebounded in recent years. The largest recorded Antarctic ozone hole was recorded in 2006.

> Read the journal article: "What would have happened to the ozone layer if chlorofluorocarbons (CFCs) had not been regulated?"