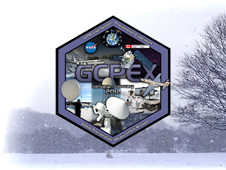 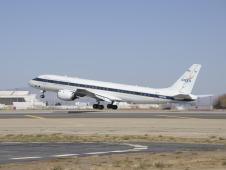 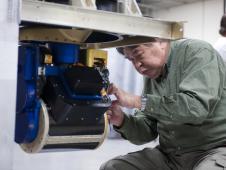 › View larger
NASA Goddard engineer Zhaonan Zhang adjusts the Conical Scanning Millimeter-wave ImagingRadiometer, or CoSMIR, scan head prior to installation in NASA’s DC-8 flying science laboratory. The instrument is being used in the GCPEx airborne study of snowfall in Canada and the northeastern United States. Credit: NASA / Tom Tschida GPM is an international satellite mission that will set a new standard for precipitation measurements from space, providing next-generation observations of worldwide rain and snow every three hours. It is also the first mission designed to detect falling snow from space.

"Snow is notoriously hard to measure as it falls," said Walter Petersen, the GPM ground validation scientist at NASA's Wallops Flight Facility in Virginia. "Snowflakes contain varying amounts of air and water, and they flutter, wobble and drift as they leave the clouds."

Knowing how "wet" a snowflake is allows scientists to measure overall water content. A wet, heavy snow can shut down a city, and melted snow is a crucial source of freshwater in many areas.

Working with Environment Canada, NASA's GPM Cold-season Precipitation Experiment (GCPEx) will measure light rain and snow in Ontario from Jan. 17 to Feb. 29. The field campaign is designed to improve satellite estimates of falling snow and test ground validation capabilities in advance of the planned launch of the GPM Core satellite in 2014.

NASA's DC-8 airborne science laboratory will fly out of Bangor, Maine, carrying radar and a radiometer that will simulate the measurements to be taken from space by GPM. At an altitude of 33,000 feet (10 kilometers), the DC-8 will make multiple passes over an extensive ground network of snow gauges and sensors at Environment Canada's Center for Atmospheric Research Experiments north of Toronto.

The GCPEx field experiment will help scientists match measurements of snow in the air and on the ground with the satellite's measurements.

"We will be looking at the precipitation and the physics of precipitation, such as snowflake types, sizes, shapes, numbers and water content," Petersen said. "These properties affect both how we interpret and improve our measurements."

GPM's Core satellite is being built at NASA's Goddard Space Flight Center in Greenbelt, Md., with instruments provided by NASA and its mission partner, the Japanese Aerospace and Exploration Agency (JAXA). The spacecraft will orbit Earth at a 65-degree inclination, covering the world from the Antarctic Circle to the Arctic Circle.

GPM will carry a microwave radiometer and a dual-frequency precipitation radar that distinguishes a snowflake's size and shape, which affects how much water it holds. Knowing these microphysical properties will lead to more accurate estimates of rain and snowfall, especially during winter and at high latitudes where snow is the dominant form of precipitation.

The Ontario region is prone to both lake effect snow squalls and widespread snowstorms. If the opportunity exists, the DC-8 also will fly over blizzards along the northeastern United States. While the DC-8 flies above the clouds, two other aircraft, one from the University of North Dakota and another from Canada, will fly through the clouds, measuring the microphysical properties of the raindrops and snowflakes inside.

Advanced ground radars will scan the entire air column from the clouds to the Earth's surface.

NASA’s Dryden Flight Research Center in Edwards, Calif., manages the DC-8 flights for the GCPEx mission. The aircraft is based at the center’s aircraft operations facility in Palmdale, Calif. NASA's Marshall Space Flight Center in Huntsville, Ala., is providing aircraft tracking and guidance through the Real Time Mission Monitor, as well as GCPEx real-time data and personnel support for the ground instruments in Canada.

For more information on the GCPEx ground validation, visit:

For broadcast video or imagery, visit: