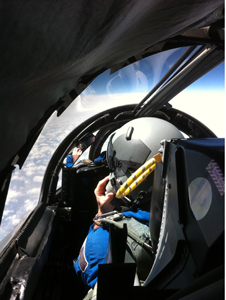 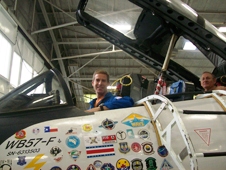 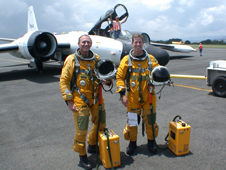 Click image for full resolution.
While the pilot stays on course, the SEO monitors science instruments and communicates to the scientist the real-time weather picture, which may require an altered course.
The Mid-latitude Airborne Cirrus Properties Experiment (MACPEX) is a NASA field campaign that is investigating cirrus cloud properties and the processes that affect their impact on solar radiation. The campaign uses NASA's WB-57 research aircraft based at Ellington, Texas, to conduct science flights over Oklahoma, the southeastern United States and the Gulf of Mexico this month.

Research pilot William Rieke from NASA's Johnson Space Center, Houston, has flown more than 3,500 hours in numerous aircraft, including the F/A 18 Hornet strike fighter when he was in the United States Navy. Since then, Rieke has been a flight engineer on Boeing 727's and 737-200's for a major airline. As a pilot for NASA since 2004, he has flown the NorthropT-38N Talon jet, the 747 Shuttle Carrier Aircraft, which NASA uses to transport Space Shuttle orbiters, and the WB-57.

There are numerous high altitude aircraft, so why was the NASA WB-57 selected for this mission? Is there any advantage to a two-seater aircraft for missions? Does a project scientist sit in the other seat, and what kinds of instruction do you receive while in flight?

William Rieke: The WB-57 aircraft is a very good high-altitude platform that can take more than 6,000 lbs. of experiments very high into the atmosphere . There are two aircrew in the WB-57, a pilot and a Sensor Equipment Operator (SEO). The SEO is usually very busy taking care of the science instruments and communicating to scientists on the ground the status of our flight. Both the pilot and SEO have a preflight brief with the scientists who decide where the aircraft needs to be positioned to collect the desired atmospheric data. In flight, the WB-57 has the capability to communicate via radio or satellite phone to the mission scientist on the ground to communicate the real-time weather picture. With their input, the aircrew then plans an appropriate course.

Have you flown similar airborne missions?

WR: The WB-57 program has completed many similar missions to MACPEX. I have flown several campaigns to Costa Rica, Hawaii and England, to name a few.

What is your biggest concern when flying these missions?

Anywhere we go, NASA ensures the safety of the people first. They are the most treasured assets NASA has. The mission managers ensure that the airfield has the proper equipment available to take care of the WB-57, or we bring it ourselves. While flying, my concern is to keep the aircraft within the requested boundaries. Sometimes they can be very restrictive which makes it difficult to maneuver to collect data.

What’s it like to fly the WB-57 through ice clouds? Are ice clouds dense? If you’re flying through clouds, isn’t your visibility distorted? Can you hear the ice crystals hit the plane? Are the ice crystals microscopic or big, like hailstones? How fast are you flying? Does the density or visibility of the clouds slow down your flights?

WR: Flying through clouds is similar to driving through fog in a car – you just can’t see as well! Aircraft have confidently been flying through clouds ever since we learned to trust our instruments. When the pilot cannot see the horizon, they need to rely on accurate instrumentation to get the aircraft through it. At high altitudes, ice crystals can sometimes be very apparent. The ice crystals that I have flown through have a shimmery look to them as the sun is reflected off each tiny particle when it zips by the aircraft. However, the crystals are very small and therefore, not a danger to the aircraft.

While flying through ice clouds, what precautions will be taken to prevent ice on the wings?

WR: It all starts at the preflight planning brief. The aircrew discusses the flight profile with the scientists. Weather forecasts are investigated for potentially hazardous conditions., This is a combined effort of the aircrew and MACPEX scientists. If icing is encountered while airborne, the WB-57 has engine anti-ice capability. However, there is no anti-ice or de-ice capability for the wings. When ice forms on the wings in flight, aircrew has been trained to rapidly exit the icing conditions by climbing or descending several thousand feet. Normally, this will clear the icing conditions.

Is the cockpit cold? What are you wearing to prevent frostbite?

WR: The aircraft is kept warm by using heated air from the two engines on the WB57. It is adjustable to each pilots comfort level. Additionally, when we fly at higher altitudes, aircrew wear special high altitude suits that protect us from the reduced pressure and have the added benefit of keeping us warm.

How high will you fly, and for what purpose?

WR: We will fly as high as the mission scientist would like us to fly based on their specific objectives.

What type of instruments will be on-board? Will they require special maneuvers, and how long will you stay in the air ?

WR: There are 24 instruments on board that collect various atmospheric data. There are no special maneuvers required. The scientist requires that the aircraft be in clouds the majority of the time to collect the most data.

Contrails are visible trails of condensed water vapor made by the exhaust of aircraft engines. If the air is cold enough, this trail will comprise tiny ice crystals. Is there any concern that your jet exhaust (contrails) will affect your data collection?

WR: Actually, the scientist would like us to fly through our own contrail, or other aircraft contrails, to analyze the particulates left behind by aircraft. So, it will not compromise the data but rather help us better understand how we are impacting the environment. Ruth Dasso Marlaire
Ames Research Center, Moffett Field, Calif.
› Back To Top