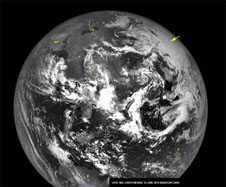 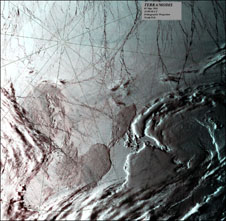 This true-color image over the North Pole was acquired by the MODerate-resolution Imaging Spectroradiometer (MODIS), flying aboard the Terra spacecraft, on May 5, 2000. Credit: Allen Lunsford, NASA GSFC Direct Readout Laboratory 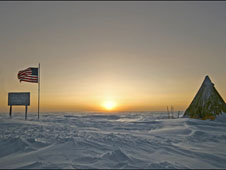 The South Pole seen at sunrise during the part of the year where there is sun at all in the region. Credit: Calee Allen, National Science Foundation

The poles are warming faster than other parts of the Earth – a fact that has been widely accepted for years. But what is causing the accelerated warming?

Research aimed at answering that question has been done before, but a recent study by Patrick Taylor, a scientist at NASA's Langley Research Center in Hampton, Va., suggests a new reason.

Taylor's research shows the Earth's poles are warming faster than the rest of the planet because of energy in the atmosphere that is carried to the poles through large weather systems.

"Surface albedo at the poles, however, is lowest in the summer, which is when we see the weakest temperature response. More recent research suggests that other atmospheric processes are at work," Taylor said.

For this study, Taylor used Clouds and the Earth's Radiant Energy System (CERES) satellite data, and a climate model that assumes carbon emissions will be reduced slightly below "business as usual."

His results suggest that summertime changes in clouds reflect a lot of the sun's energy, offsetting the low surface albedo, and that it must be something else that determines the amount of warming.

"The total warming at the poles is due to changes in clouds, water vapor, surface albedo and atmospheric temperature," he said. "But there is greater warming in the winter than in the summer and that is caused by energy transport," he said.

Taylor's research shows that the seasonality of the polar warming is largely a result of energy in the atmosphere that is being transported to the poles through large weather systems.

The importance of energy transport in the warming of the poles suggests more study is needed on the interactions between large weather systems and more local changes, involving clouds, water vapor, surface albedo and atmospheric temperature, in order to better understand climate sensitivity.

"We hope to learn more about the processes involved in atmospheric processes in order to better understand what climate models are telling us," Taylor said.