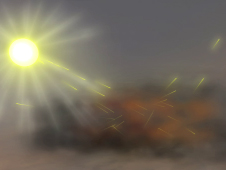 Aerosols can influence climate directly by either reflecting or absorbing the sun's radiation as it moves through the atmosphere. The tiny airborne particles enter the atmosphere from sources such as industrial pollution, volcanoes and residential cooking stoves. Credit: NASA Goddard's Scientific Visualization Studio
> Larger image Though greenhouse gases are invariably at the center of discussions about global climate change, new NASA research suggests that much of the atmospheric warming observed in the Arctic since 1976 may be due to changes in tiny airborne particles called aerosols.

Emitted by natural and human sources, aerosols can directly influence climate by reflecting or absorbing the sun's radiation. The small particles also affect climate indirectly by seeding clouds and changing cloud properties, such as reflectivity.

A new study, led by climate scientist Drew Shindell of the NASA Goddard Institute for Space Studies, New York, used a coupled ocean-atmosphere model to investigate how sensitive different regional climates are to changes in levels of carbon dioxide, ozone, and aerosols.

The researchers found that the mid and high latitudes are especially responsive to changes in the level of aerosols. Indeed, the model suggests aerosols likely account for 45 percent or more of the warming that has occurred in the Arctic during the last three decades. The results were published in the April issue of Nature Geoscience.

Though there are several varieties of aerosols, previous research has shown that two types -- sulfates and black carbon -- play an especially critical role in regulating climate change. Both are products of human activity.

Sulfates, which come primarily from the burning of coal and oil, scatter incoming solar radiation and have a net cooling effect on climate. Over the past three decades, the United States and European countries have passed a series of laws that have reduced sulfate emissions by 50 percent. While improving air quality and aiding public health, the result has been less atmospheric cooling from sulfates. 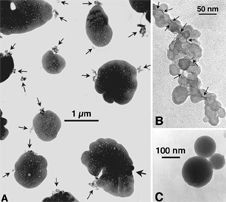 Researchers used an electron microscope to capture these images of black carbon attached to sulfate particles. The spherical structures in image A are sulfates; the arrows point to smaller chains of black carbon. Black carbon is shown in detail in image B. Image C shows fly ash, a product of coal-combustion, that's often found in association with black carbon. While black carbon absorbs radiation and contributes to warming, sulfates reflect it and tend to cool Earth. Credit: Peter Buseck, Arizona State University
> Larger image At the same time, black carbon emissions have steadily risen, largely because of increasing emissions from Asia. Black carbon -- small, soot-like particles produced by industrial processes and the combustion of diesel and biofuels -- absorb incoming solar radiation and have a strong warming influence on the atmosphere.

In the modeling experiment, Shindell and colleagues compiled detailed, quantitative information about the relative roles of various components of the climate system, such as solar variations, volcanic events, and changes in greenhouse gas levels. They then ran through various scenarios of how temperatures would change as the levels of ozone and aerosols -- including sulfates and black carbon -- varied in different regions of the world. Finally, they teased out the amount of warming that could be attributed to different climate variables. Aerosols loomed large.

That makes sense, Shindell explained, because of the Arctic's proximity to North America and Europe. The two highly industrialized regions have produced most of the world's aerosol emissions over the last century, and some of those aerosols drift northward and collect in the Arctic. Precipitation, which normally flushes aerosols out of the atmosphere, is minimal there, so the particles remain in the air longer and have a stronger impact than in other parts of the world.

Since decreasing amounts of sulfates and increasing amounts of black carbon both encourage warming, temperature increases can be especially rapid. The build-up of aerosols also triggers positive feedback cycles that further accelerate warming as snow and ice cover retreat.

In the Antarctic, in contrast, the impact of sulfates and black carbon is minimized because of the continent’s isolation from major population centers and the emissions they produce.

"There's a tendency to think of aerosols as small players, but they're not," said Shindell. "Right now, in the mid-latitudes of the Northern Hemisphere and in the Arctic, the impact of aerosols is just as strong as that of the greenhouse gases."

Since the 1890s, surface temperatures have risen faster in the Arctic than in other regions of the world. In part, these rapid changes could be due to changes in aerosol levels. Clean air regulations passed in the 1970s, for example, have likely accelerated warming by diminishing the cooling effect of sulfates. Credit: Drew Shindell, Goddard Institute for Space Studies
> Larger image (pdf) The growing recognition that aerosols may play a larger climate role can have implications for policymakers.

"We will have very little leverage over climate in the next couple of decades if we're just looking at carbon dioxide," Shindell said. "If we want to try to stop the Arctic summer sea ice from melting completely over the next few decades, we're much better off looking at aerosols and ozone."

Aerosols tend to be quite-short lived, residing in the atmosphere for just a few days or weeks. Greenhouses gases, by contrast, can persist for hundreds of years. Atmospheric chemists theorize that the climate system may be more responsive to changes in aerosol levels over the next few decades than to changes in greenhouse gas levels, which will have the more powerful effect in coming centuries.

"This is an important model study, raising lots of great questions that will need to be investigated with field research," said Loretta Mickley, an atmospheric chemist from Harvard University, Cambridge, Mass. who was not directly involved in the research. Understanding how aerosols behave in the atmosphere is still very much a work-in-progress, she noted, and every model needs to be compared rigorously to real life observations. But the science behind Shindell’s results should be taken seriously.

"It appears that aerosols have quite a powerful effect on climate, but there's still a lot more that we need to sort out," said Shindell.

NASA’s upcoming Glory satellite is designed to enhance our current aerosol measurement capabilities to help scientists reduce uncertainties about aerosols by measuring the distribution and microphysical properties of the particles.