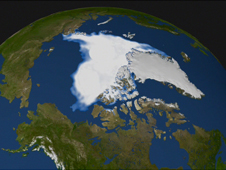 "Piecing Together the Temperature Puzzle" illustrates how NASA satellites enable us to study possible causes of climate change.
› Watch video 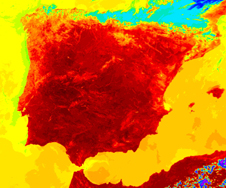 This image, one of 10 in the gallery, shows a false-color image of Spain during a July 2004 heatwave. Credit: NASA/Goddard/MODIS Rapid Response Team
› View gallery NASA has released a new video and image gallery that illustrate how NASA satellites enable scientists to observe climate change today and make predictions for the future.

The video, “Piecing Together the Temperature Puzzle,” explores possible causes for rising global temperatures. It explains what role fluctuations in the solar cycle, changes in snow and cloud cover, and rising levels of heat-trapping greenhouse gases play in contributing to global warming.

The new gallery consists of ten spectacular satellite images of our warming planet captured during the hottest decade since modern record keeping began. The images show the kinds of events -- including melting glaciers, heat waves, and floods -- that many scientists predict will become more frequent in coming decades due to climate change.

Both the video and the image gallery are part of a new multimedia collection available with the launch of the “Our Warming World” Web page on NASA’s Global Climate Change Web site. “Our Warming World” features videos, images, articles and interactive visuals that discuss rising global temperatures and the impact of greenhouse gases as the main contributor to today’s climate change.


http://climate.nasa.gov/warmingworld
Images from the gallery and the video can also be viewed and downloaded at NASA's Scientific Visualization Studio Web site.
› Back To Top