Grow Text SizeShrink Text Size
Three Active Volcanoes Spotted on Satellite Imagery from NASA
From space, NASA keeps a watchful eye on volcanic activity around the world with many satellites. NASA has just released satellite images showing activity this week from volcanoes in the countries of Eritrea, Chile and Indonesia.

NASA's Terra satellite and the GOES-11 satellite captured ash plumes or heat coming from the Nabro volcano, the Puyehue-Cordón volcano, and the Soputan volcano, respectively, over the past week. There are a number of other volcanoes showing activity around the world, but thanks to good visibility these three volcanoes were more easily seen from space this week.

NASA’s Terra satellite flew over the Nabro volcano in Eritrea on July 6 at 07:50 UTC (3:50 a.m. EDT) and the Moderate Resolution Imaging Spectroradiometer (MODIS) instrument captured "heat signatures" or hot areas in the volcano. The MODIS images are created by the MODIS Rapid Response Team at NASA's Goddard Space Flight Center in Greenbelt, Md. The team provides images from the MODIS instrument (that flies on both the Terra and Aqua satellite) every day.

Nabro is located in the State of Eritrea, a country in the Horn of Africa. Eritrea's neighboring countries include Ethiopia to the south, Djibouti to the southeast and Sudan to the west. An ash plume was difficult to pinpoint on the imagery because of dust blowing in the direction of the volcano and over the Gulf of Aden from nearby Somalia. 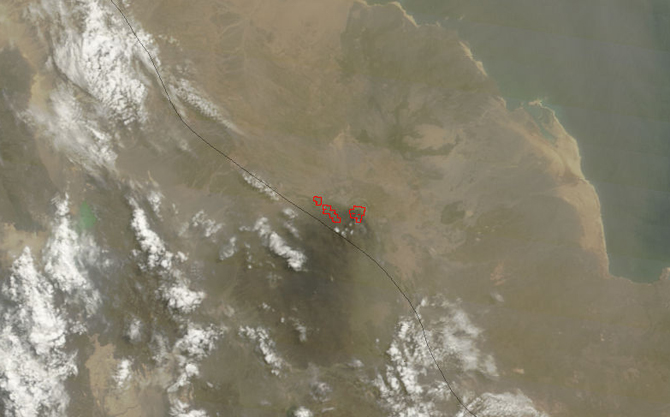 NASA's Terra satellite captured this image of the Nabro Volcano located in the African country of Eritrea. The image was taken on July 6 at 07:50 UTC (3:50 a.m. EDT) and the red spots indicate heat. The light brown area over the Gulf of Aden (right) is blowing dust from northern Somalia (right) in the image. (Credit: NASA Goddard MODIS Rapid Response Team)
› Larger image

An image from the Geostationary Operational Environmental Satellite called GOES-11 (a satellite managed by NOAA) showed a light brown ash plume from the Puyehue-Cordón volcano at 14:45 UTC (10:45 a.m. EDT) n July 3, 2011. The image was created by the NASA/NOAA GOES Project at NASA Goddard, and clearly shows an ash plume blowing into the eastern Pacific Ocean. On Thursday, July 7, ash continued streaming from the volcano and grounding flights in South America. 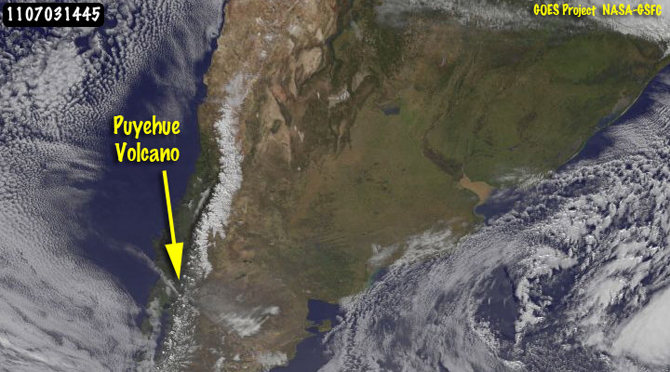 The Puyehue-Cordón Caulle Volcano is located in the Andes Mountains of central Chile, near the Argentina border. According to Volcanolive.com, it consists of Puyehue volcano and Cordón Caulle fissure complex.

The MODIS instrument on NASA's Terra satellite captured an image of an ash plume from the eruption of the Soputan volcano, Sulawesi Island, Indonesia on July 3, 2011 at 02:25 UTC (July 2, 10:25 p.m. EDT).

Mount Soputan is located in the North Sulawesi province. It erupted on July 3 and sent ash and smoke more than three miles (five kilometers) high, according to news.au.com. On July 3, sixteen flights from Manado International Airport were canceled or postponed, according to earthquake-report.com.

Mount Soputan last erupted in 2008 and is located in a sparsely populated area. By July 7, the Mount Soputan Geological Survey reported that the eruption appears to have stopped.