Grow Text SizeShrink Text Size
Volcanoes May Have Provided Sparks and Chemistry for First Life
Lightning and gases from volcanic eruptions could have given rise to the first life on Earth, according to a new analysis of samples from a classic origin-of-life experiment by NASA and university researchers. The NASA-funded result is the subject of a paper in Science appearing October 17. 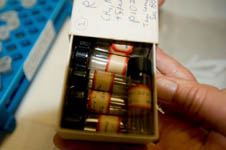 The Bada Lab at Scripps holds the original samples used by Stanley Miller to study the origins of life. Credit: Scripps Institution of Oceanography, University of Calif., San Diego
Print-resolution copy
"Historically, you don’t get many experiments that might be more famous than these; they re-defined our thoughts on the origin of life and showed unequivocally that the fundamental building blocks of life could be derived from natural processes," said lead author Adam Johnson, a graduate student with the NASA Astrobiology Institute team at Indiana University, Bloomington, Ind.

From 1953 to 1954, Professor Stanley Miller, then at the University of Chicago, performed a series of experiments with a system of closed flasks containing water and a gas of simple molecules. At the time, the molecules used in the experiment (hydrogen, methane, and ammonia) were thought to be common in Earth's ancient atmosphere.

The gas was zapped with an electric spark. After running the experiment for a few weeks, the water turned brown. When Miller analyzed the water, he found it contained amino acids, which are the building blocks of proteins -- life's toolkit -- used in everything from structures like hair and nails to processes that speed up, facilitate, and regulate chemical reactions. The spark provided the energy for the molecules to recombine into amino acids, which rained out into the water. His experiment showed how simple molecules could be assembled into the more complex molecules necessary for life by natural processes, like lightning in Earth's primordial atmosphere. 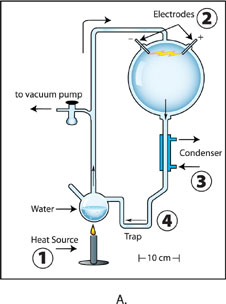 The apparatus used for Miller's original experiment. Boiled water (1) creates airflow, driving steam and gases through a spark (2). A cooling condenser (3) turns some steam back into liquid water, which drips down into the trap (4), where chemical products also settle. Credit: Ned Shaw, Indiana University
Miller came to the Chemistry Department at the University of California, San Diego in 1960. Professor Jeffrey Bada, a co-author of the paper, was his graduate student in chemistry between 1965 and 1968. Bada joined the faculty of the Scripps Institution of Oceanography (part of UCSD) in 1971.

"Stanley and I continued to work on various projects until he died in 2007. When Adam and I found the samples from the original experiments, it was a great opportunity to reanalyze these historic samples using modern methods," said Bada. The team wanted to see if modern equipment could discover chemicals that could not be detected with the techniques of the 1950s. They analyzed the samples and turned to Daniel Glavin and Jason Dworkin of NASA's Goddard Space Flight Center in Greenbelt, Md., who helped the analysis with state-of-the-art instruments in their Goddard Astrobiology Analytical lab.

Miller actually ran three slightly different experiments, one of which injected steam into the gas to simulate conditions in the cloud of an erupting volcano. "We found that in comparison to Miller's classic design everyone is familiar with from textbooks, samples from the volcanic apparatus produced a wider variety of compounds," said Bada.

"We discovered 22 amino acids, 10 of which have never been found in any other experiment like this," said Glavin. This is significant because thinking on the composition of Earth's early atmosphere has changed. Instead of being heavily laden with hydrogen, methane, and ammonia, many scientists now believe Earth's ancient atmosphere was mostly carbon dioxide, carbon monoxide, and nitrogen. 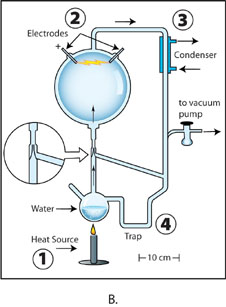 The apparatus used for Miller's "second," initially unpublished experiment. Boiled water (1) creates airflow, driving steam and gases through a spark (2). A tapering of the glass apparatus (inlay) creates a spigot effect, increasing air flow. A cooling condenser (3) turns some steam back into liquid water, which drips down into the trap (4), where chemical products also settle. Credit: Ned Shaw, Indiana University
"At first glance, if Earth's early atmosphere had little of the molecules used in Miller's classic experiment, it becomes difficult to see how life could begin using a similar process. However, in addition to water and carbon dioxide, volcanic eruptions also release hydrogen and methane gases. Volcanic clouds are also filled with lightning, since collisions between volcanic ash and ice particles generate electric charge. Since the young Earth was still hot from its formation, volcanoes were probably quite common then. The organic precursors for life could have been produced locally in tidal pools around volcanic islands, even if hydrogen, methane, and ammonia were scarce in the global atmosphere. As the tidal pools evaporated, they would concentrate the amino acids and other molecules, making it more likely that right sequence of chemical reactions to start life could occur. In fact, volcanic eruptions could assist the origin of life in another way as well – they produce carbonyl sulfide gas, which helps link amino acids into chains called peptides." said Glavin.

The research was funded in part by the NASA Astrobiology Institute. "This research is both a link to the experimental foundations of astrobiology as well as an exciting result leading toward greater understanding of how life might have arisen on Earth," said Carl Pilcher, director of the NASA Astrobiology Institute headquartered at NASA Ames Research Center. The team also includes James Cleaves of the Carnegie Institution for Science, Washington, and Antonio Lazcano of Facultad de Ciencias, National Autonomous University of Mexico (UNAM), Mexico.