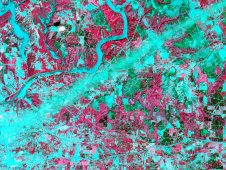 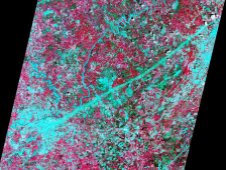 Images of tornado damage near Tuscaloosa, Ala., seen on May 4, 2011. (NASA) Recent images of the April 27 storm damage path have been captured by NASA's Terra satellite, part of NASA's Earth Observing Satellite system, or EOS. An instrument aboard Terra, called Advanced Spaceborne Thermal Emission and Reflection Radiometer or ASTER, captured the images show the scars from the outbreak.

ASTER combines infrared, red, and green wavelengths of light to make false-color images that distinguish between water and land. Water is blue. Buildings and paved surfaces are blue-gray. Vegetation is red.

The physical principle guiding the use of satellite data to detect tornado damage is based on the premise that the strong winds associated with a tornado will change the physical characteristics of the surface in such a way as to alter the visible and infrared energy reflected. These characteristics could be a change in the orientation of surface features, such as the complete destruction of a house in a residential area, the snapping of trees in a forest region, the uprooting of crops in an agriculture area, or minimal damage to grassland in a pasture or field.

Terra/ASTER is a joint activity between NASA's Science Mission Directorate Earth Science Division and Japan's Ministry of Economy, Trade and Industry. Terra is one of 14 NASA satellites that look at the Earth to study and understand changes in the Earth system and provide societal benefits.