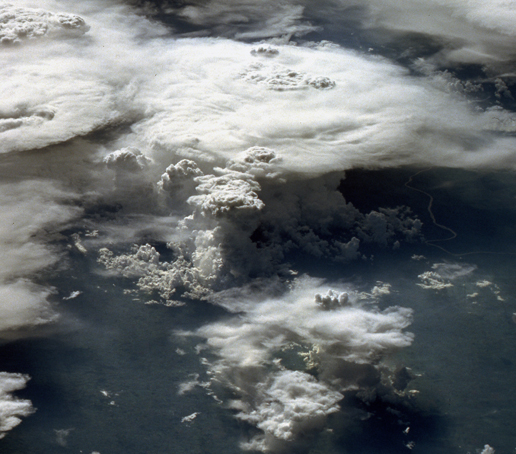 A prototype system could provide commercial airline pilots with key weather and turbulence forecasts when flying over remote regions of the ocean where little real- or near-real-time data is available now. The NASA-funded system, being developed by the National Center for Atmospheric Research (NCAR), combines computer models and data from five operating NASA satellites with an artificial intelligence system to predict turbulence. The system is on track for testing next year, with the goal of ultimately giving pilots a regularly updated picture of potential storms over the ocean so that they can fly away from or around danger. This photograph, acquired in February 1984 by an astronaut aboard the space shuttle, shows a series of mature thunderstorms in southern Brazil. 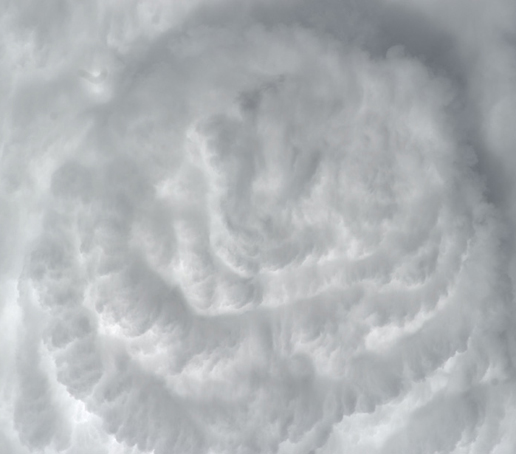 A 2009 astronaut photo from the International Space Station (ISS) of deep convective clouds, seen from above, over the Atlantic Ocean. Free standing and embedded towering convective clouds are particularly dangerous to aircraft flying over the open ocean. 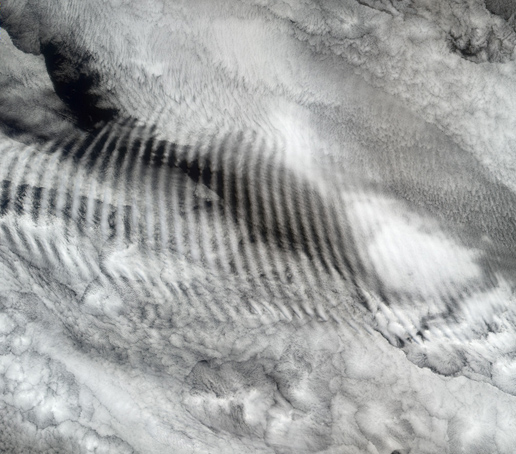 NASA and NCAR are working to develop a near-real-time forecast that identifies turbulence from breaking gravity waves that are generated by rapidly rising deep convection. This image from NASA's MODIS instrument (Moderate Resolution Imaging Spectroradiometer) shows gravity waves over the ocean. Atmospheric gravity waves (also called atmospheric internal waves) occur either when a uniform layer of air blows over a large obstacle, like a mountain or island or when rapidly rising, deep convection perturbs a stable layer from below, as in the oceanic case we have illustrated. When the air hits the obstacle or is disturbed by rising convection from below, the horizontal ribbons of uniform air are disturbed, which forms a wave pattern. This wave pattern in the air impresses itself onto sea waves when it touches the surface of the ocean. In addition to the surface mimicking the wave pattern, wave clouds can form as well, creating potential turbulence for aircraft. 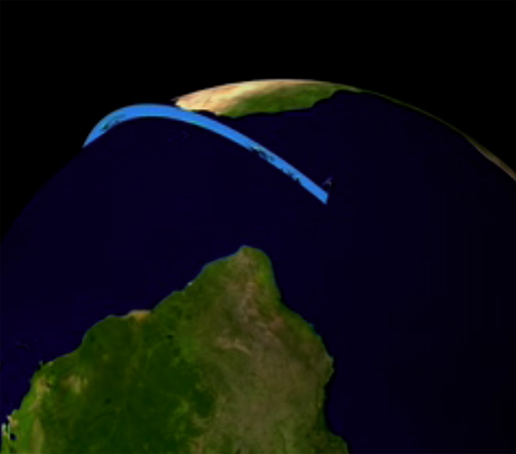 Slicing through the Atmosphere

NASA uses advanced satellite instruments to study the atmosphere. One instrument, CALIPSO, uses a lidar system to make a 3-D view of clouds. CALIPSO data will be used as a source of precise validation and tuning for these NASA/NCAR applications under development. Click on the image or below to view an animation showing a series of CALIPSO curtain images from around the globe.

View related animation
› Back To Top