Grow Text SizeShrink Text Size
NASA's Tropical Rainfall Measuring Mission Turns 15
When it rains it pours, goes the saying, and for the last 15 years, the data on tropical rainfall have poured in. NASA's Tropical Rainfall Measuring Mission (TRMM) was launched on Nov. 27, 1997, and for the last decade and a half has enabled precipitation science that has had far-reaching applications across the globe.


Rain is one of the most important natural processes on Earth, and nowhere does it rain more than across the tropics. Orbiting at an angle to the equator that covers 35 degrees north to 35 degrees south of the equator, TRMM carries five instruments that collectively measure the intensity of rainfall, characteristics of the water vapor and clouds, and lightning associated with the rain events. One of the instruments, the Precipitation Radar, built by NASA's mission partner the Japan Aerospace Exploration Agency (JAXA), is the first precipitation radar flown in space. It returns images of storms that for the first time have revealed close-up, three-dimensional views of how rainbands in tropical cyclones develop, potentially indicating how strong the storms might become.

The TRMM Precipitation Radar penetrates clouds to see raindrops and precipitation-sized ice such as hail. The radar's ability to make precise measurements of both the altitude and the intensity of precipitation gives scientists clues about the energy that fuels thunderstorms, hurricanes and other kinds of severe weather. The deepest and most intense thunderstorms have the potential to generate surface rainfall that may briefly exceed a rate of 4 inches (100 millimeters) per hour, and to generate hail, lightning and occasionally tornadoes.

Another key instrument on TRMM is the Microwave Imager, or TMI, that provides X-ray-like images of rainfall across a swath more than three times as wide as that from the radar. Data from TMI goes into forecasts of tropical cyclones made by the National Hurricane Center, including the recent Hurricane Sandy, and maps used by emergency managers that show areas at risk of flooding after heavy rains.


Originally a three-year mission, TRMM's extended mission life has provided a great boon to the scientific understanding of precipitation and its role in broad weather patterns and climate. TRMM has given scientists a decade and a half of data that allows them a better understanding of how rain varies daily, seasonally and annually; how El Niño affects global rain patterns; how regional rain events like the Indian monsoon vary throughout the season; and even how humans have affected local precipitation through the effects of urban heat islands, deforestation and pollution. 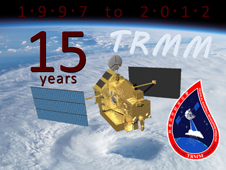 "TRMM has become the world’s foremost satellite for the study of precipitation and associated storms and climate processes in the tropics," says TRMM Project Scientist Scott Braun at NASA's Goddard Space Flight Center in Greenbelt, Md. "TRMM has met and exceeded its original goal of advancing our understanding of the distribution of tropical rainfall and its relation to the global water and energy cycles." He adds that TRMM has evolved from an experimental mission focused on patterns of tropical rainfall into the primary satellite in a system of research and operational satellites used for analyzing precipitation characteristics on time scales from hours to years.

While TRMM continues to collect valuable science data, its fuel will eventually run out for operations. Its successor, the Global Precipitation Measurement (GPM) mission, is gearing up for launch in February 2014. GPM's orbit will extend coverage beyond the tropics to the Arctic and Antarctic circles, and its two instruments, an advanced version of TRMM's microwave imager and a dual-frequency precipitation radar, will be more sensitive to detecting light rain and snow than the instruments currently on TRMM. Together with its U.S. and international partners including the space agencies of Japan, France, India and Brazil, GPM will expand upon TRMM's highly successful legacy.