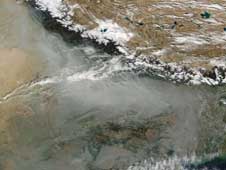 > View larger image
A blanket of haze is common in the Indo-Gangetic Plain. The haze piles up along the Himalaya Mountains, forming a strip of white-gray that obscures the ground. The Moderate Resolution Imaging Spectroradiometer (MODIS) on NASA’s Aqua satellite captured this true-color image on December 2, 2009. Credit: Earth Observatory, NASA "So many disparate elements, both natural and man-made, converge in the Himalayas," said William Lau, a climatologist from NASA’s Goddard Space Flight Center in Greenbelt, Md. "There’s no other place in the world that could produce such a powerful atmospheric heat pump," referring to a new hypothesis he’s put forward to explain the rapid retreat of Himalayan glaciers in recent decades.

The Himalayas, home to the tallest mountains on Earth, include more than 110 peaks and stretch 2,500 kilometers (1,550 miles). Bounded to the north by the Tibetan Plateau, to the west by deserts, and to the south by a bowl-like basin teeming with people, the mountains hold 10,000 glaciers.

These massive rivers of ice spill off mountain sides and grind down through creviced valleys. In the spring, when the monsoon carries moist air from the Indian Ocean, the glaciers begin to thaw, replenishing lakes, streams, and some of Asia's mightiest rivers, on which more than a billion people depend.

South of the Himalayas -- which forms the east-west edge of the table-like Tibetan Plateau -- the mountains give way to the Indo-Gangetic plain, one of the most fertile and densely populated areas on Earth. The plain has become a megalopolis of cities including Delhi, Dhaka, Kanpur, and Karachi, as well as a hotspot for air pollution, with a steady supply of industrial soot mixing with ash and other particles in the air. 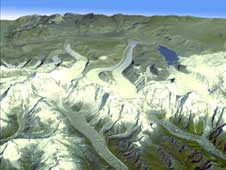 > View larger image
Massive rivers of ice spill off the sides of mountains and grind through creviced valleys in the Himalayas. In the spring, when the monsoon carries moist air from the Indian Ocean, the glaciers begin to thaw, replenishing lakes, streams, and some of Asia's mightiest rivers, on which more than a billion people depend. This view of glaciers in Bhutan was created by draping an ASTER simulated natural color image over digital topography from the ASTER Global Digital Elevation Model (GDEM) data set. Credit: NASA To the west, in the northwestern part of the Indian subcontinent, the Thar Desert stretches across 200,000 square kilometers (77,000 square miles) of arid, dusty land. During the spring, westerly winds pluck dust and sand from the Thar and blow it toward the Indo-Gangetic plain.

The dust joins a mash of industrial pollutants to create a massive brown cloud visible from space. Underneath the brown cloud, some solar radiation is blocked from reaching the surface, causing the under-lying land surface to cool.

The thick soot and dust layer absorbs solar radiation, and heats up the air around the Himalayan foothills. The warm, rising air enhances the seasonal northward flow of humid monsoon winds, forcing moisture and hot air up the slopes of the Himalayas.

As the aerosol particles rise on the warm, convecting air, they produce more rain over northern India and the Himalayan foothill, which further warms the atmosphere and fuels a "heat pump" that draws yet more warm air to the region.

"The phenomenon changes the timing and intensity of the monsoon, effectively transferring heat from the low-lying lands over the subcontinent to the atmosphere over the Tibetan Plateau, which in turn warms the high-altitude land surface and hastens glacial retreat," Lau said. His modeling shows that aerosols -- particularly black carbon and dust -- likely cause as much of the glacial retreat in the region as greenhouse gases via this "heat pump" effect.