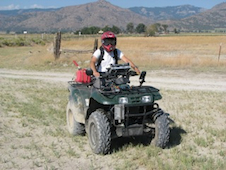 Click image for full resolution.
The SIERRA UAS collected data and then sent it to a radio receiver held by a USGS researcher riding an all-terrain vehicle (ATV) in the field.
Image credit: NASA Ames 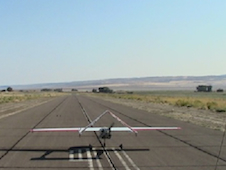 The Surprise Valley Fault, a stretch of land that snakes along the Warner Mountain Range in northeastern California, is pocked with small surface scars and billows steam from hot springs, which makes it an ideal location to study underground seismic activity. In the past, data collection was limited to ground surveys performed by foot and four-wheel all-terrain vehicles. This year, data collection of this treacherous terrain was enhanced by employing an unmanned aircraft system (UAS), called the Sensor Integrated Environmental Remote Research Aircraft (SIERRA), managed and operated by NASA’s Ames Research Center at Moffett Field, Calif.

SIERRA is a small, lightweight, low-flying UAS that can carry a relatively large payload weighing about 100 lbs. over a significant range of approximately 600 miles. The aircraft is designed to fly very low altitude missions for remote area surveys like the Surprise Valley project, led by the U.S. Geological Survey and funded by NASA.

“This mission highlights an important science niche for the small to medium class of unmanned aircraft,” said Matt Fladeland, SIERRA’s project manager. “These aircraft can collect data at slow speeds at very low altitudes over the surface in remote locations without risking life, or high-value aircraft.”

Researchers from NASA’s Ames, U.S. Geological Survey, San Francisco, Calif., Central Washington University, Ellensburg, Wash. and Carnegie Mellon University, Pittsburgh, Penn., met in the small rural community of Surprise Valley in early September 2012 to further investigate underground faults and fractures and better understand the flow of hot spring fluids through the network of crevices and channels. By investigating this geothermal fluid circulation system, they hope to refine their predictions of damaging earthquakes in the region.

This field season, SIERRA was programmed to collect data along a specified flight path. Flying in a broad zigzag pattern across Surprise Valley, the aircraft collected magnetic data from large features in previously unexplored areas. As part of its payload, the UAS carried a cesium magnetometer and a fluxgate magnetometer, an instrument that corrects for magnetic data interference from the aircraft that may obscure the readings from the subsurface structures they are mapping. As part of the communication process, the aircraft transmitted flight parameter and magnetic data to radio receivers operated by researchers in the field, which then was stored onto a hard drive as a backup, in case the computer aboard the aircraft failed or aircraft crashed.

After the field deployment, scientists will estimate fault activity by comparing the magnetic data to topographic data of earlier field studies to correlate subsurface structures to areas of displacement from the fault center. Next year, a second field deployment is scheduled that researchers hope will produce a first-ever 3-D map to provide a more complete image of the geophysical data of Surprise Valley and help predict the likelihood and severity of earthquakes in this area.

In addition, the Surprise Valley municipal government can use the map to investigate land and water use issues, since water toxicity has been identified in the area, and study the geothermal system as a sustainable energy source.


For more information about SIERRA, visit: