But, from a global perspective, how warm was the summer exactly? How did the summer's temperatures compare with previous years? And was global warming the "cause" of the unusual heat waves? Scientists at NASA's Goddard Institute for Space Studies (GISS) in New York City, led by GISS's director, James Hansen, have analyzed summer temperatures and released an update on the GISS website that addresses all of these questions. 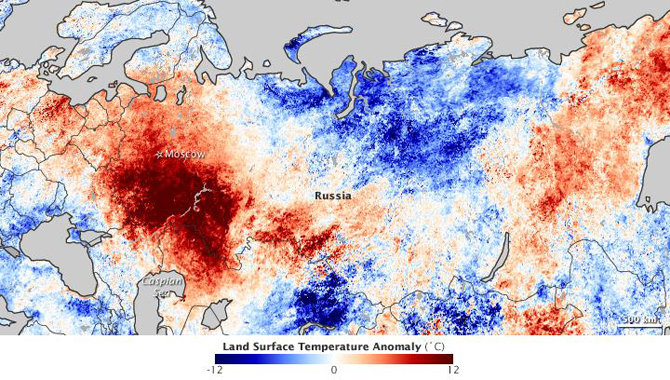 This map, based on land surface temperatures observed by the Moderate Resolution Imaging Spectroradiometer (MODIS) on NASA’s Terra satellite, shows temperature anomalies for the Russian Federation from July 20–27, 2010, compared to temperatures for the same dates from 2000 to 2008. For more information about this image, please visit NASA’s Earth Observatory. Credit: NASA/Goddard/Earth Observatory
› Larger image

As part of their analysis, Hansen and colleagues released a series of graphs that help explain why perceptions of global temperatures vary -- often erroneously -- from season to season and year to year. For example, unusually warm summer temperatures in the United States and eastern Europe created the impression of global warming run amuck in those regions this summer, while last winter's unusually cool temperatures created the opposite impression. A more global view, as shown below for 2009 and 2010, makes clear that extrapolating global trends based on the experience of one or two regions can be misleading. 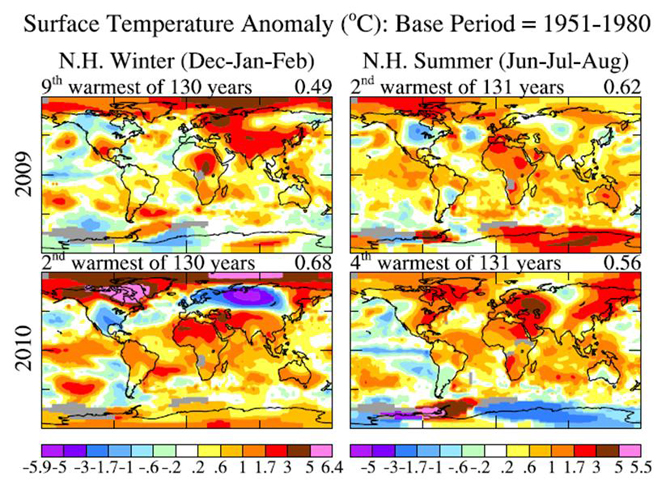 The four graphs show seasonal-mean temperature anomalies relative to 1951-1980 for the most recent two summers and winters; that is, they show how temperatures during the various seasons differ from the mean temperatures from 1951-1980, which serves as a reference period. Unusually warm summers in eastern Europe and much of the United States created the impression of record global temperatures this summer (lower right), while unseasonably cool winters in the same regions had the opposite effect during winter of 2010 (lower left). For more information about this image, please visit the GISS website. Credit: NASA/Goddard Institute for Space Studies/Hansen
› Larger image 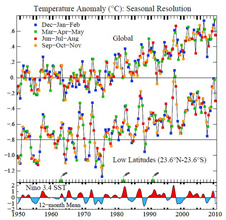 Though calendar year 2010 may or may not turn out to be the warmest on record, the warmest 12-month period in the GISS analysis was reached in mid-2010. The lower portion of the graph shows when major volcanic eruptions have occurred with green triangles. The lowest part shows El Niño (red) and La Niña (blue) trends. For more information about this graph, please visit the GISS website Credit: NASA/Goddard Institute for Space Studies/Hansen
› Larger image

This map shows temperature anomalies relative to 1951-1980 for the summer of 2010; that is, how temperatures in June through August 2010 differed from the mean temperatures from 1951-1980. A NASA visualizer created it based on data from the Goddard Institute for Space Studies. For more information about this image, visit the Earth Observatory site. Credit: NASA/Goddard/Earth Observatory
› Larger image Meanwhile, the global seasonal temperatures for the spring of 2010 -- March, April, and May -- was the warmest on GISS's record. Does that mean that 2010 will shape up to be the warmest on record? Since the warmest year on GISS’s record -- 2005 -- experienced especially high temperatures during the last four calendar months of the year, it’s not yet clear how 2010 will stack up.

"It is likely that the 2005 or 2010 calendar year means will turn out to be sufficiently close that it will be difficult to say which year was warmer, and results of our analysis may differ from those of other groups," Hansen notes. "What is clear, though, is that the warmest 12-month period in the GISS analysis was reached in mid-2010."

The Russian heat wave was highly unusual. Its intensity exceeded anything scientists have seen in the temperature record since widespread global temperature measurements became available in the 1880s. Indeed, a leading Russian meteorologist asserted that the country had not experienced such an intense heat wave in the last 1,000 years. And a prominent meteorologist with Weather Underground estimated such an event may occur as infrequently as once every 15,000 years.

In the face of such a rare event, there’s much debate and discussion about whether global warming can "cause" such extreme weather events. The answer -- both no and yes -- is not a simple one.

Weather in a given region occurs in such a complex and unstable environment, driven by such a multitude of factors, that no single weather event can be pinned solely on climate change. In that sense, it's correct to say that the Moscow heat wave was not caused by climate change.

However, if one frames the question slightly differently: "Would an event like the Moscow heat wave have occurred if carbon dioxide levels had remained at pre-industrial levels," the answer, Hansen asserts, is clear: "Almost certainly not."

The frequency of extreme warm anomalies increases disproportionately as global temperature rises. "Were global temperature not increasing, the chance of an extreme heat wave such as the one Moscow experienced, though not impossible, would be small," Hansen says.