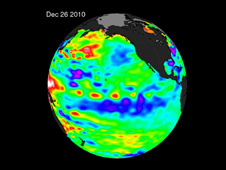 › View larger image
The La Niña is evident by the large pool cooler than normal (blue and purple) water stretching from the eastern to the central Pacific Ocean, reflecting lower than normal sea surface heights. "This La Niña has strengthened for the past seven months, and is one of the most intense events of the past half century," said Climatologist Bill Patzert of NASA JPL. Credit: NASA JPL/Bill Patzert 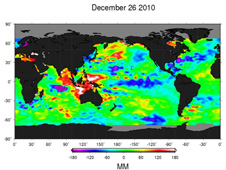 › View larger image
This Ocean Surface Topography Mission (OSTM)/Jason-2 satellite image of the Pacific Ocean is based on the average of 10 days of data centered on Dec. 26, 2010. The new image depicts places where the Pacific sea surface height is higher (warmer) than normal as yellow and red, with places where the sea surface height is lower (cooler) than normal as blue and purple. Green indicates near-normal conditions. Sea surface height is an indicator of how much of the sun's heat is stored in the upper ocean. Credit: NASA JPL/Bill Patzert New NASA satellite data indicate the current La Niña event in the eastern Pacific has remained strong during November and December 2010.

"The solid record of La Niña strength only goes back about 50 years and this latest event appears to be one of the strongest ones over this time period," said Climatologist Bill Patzert of JPL. "It is already impacting weather and climate all around the planet."

"Although exacerbated by precipitation from a tropical cyclone, rainfalls of historic proportion in eastern Queensland, Australia have led to levels of flooding usually only seen once in a century," said David Adamec, Oceanographer at NASA's Goddard Space Flight Center, Greenbelt, Md. "The copious rainfall is a direct result of La Niña’s effect on the Pacific trade winds and has made tropical Australia particularly rainy this year."

The new image depicts places where the Pacific sea surface height is near-normal, higher (warmer) than normal and lower (cooler) than normal. The cooler-than normal pool of water that stretches from the eastern to the central Pacific Ocean is a hallmark of a La Niña event.

Earth's ocean is the greatest influence on global climate. Only from space can we observe our vast ocean on a global scale and monitor critical changes in ocean currents and heat storage. Continuous data from satellites like OSTM/Jason-2 help us understand and foresee the effects of ocean changes on our climate and on climate events such as La Niña and El Niño.

The latest report from NOAA's Climate Prediction Center (CPC) noted that "A moderate-to-strong La Niña continued during December 2010 as reflected by well below-average sea surface temperatures (SSTs) across the equatorial Pacific Ocean." The CPC report said that La Niña is expected to continue well into the Northern Hemisphere spring 2011.