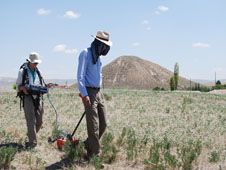 NASA Earth scientist Compton Tucker and Jennie Sturm, a radar specialist from TAG Research, survey the grounds with radar technology. Credit: NASA/Joe Nigro
› View larger image Two NASA Earth scientists have traded in their air-conditioned offices for the sweltering fields of central Turkey. Toiling nine or more hours per day, seven days a week, they walk up to 10 miles a day searching ancient Turkey archaeological grounds for bone fragments, pottery and tombs. But they aren’t using shovels, picks, and brushes to do the job.

Instead, scientists Compton Tucker from NASA’s Goddard Space Flight Center in Greenbelt, Md. and Joe Nigro, who works at Goddard through Science Systems and Application Inc., are combining NASA satellite data and ground penetrating radar (GPR) technology to map and protect areas of archaeological interest for an excavation project, located at the famed spot where Alexander the Great cut fabled King Midas’ Gordian knot. In the past, NASA radar has been used on satellites and spacecrafts to detect ice deposits and to explore deep canyons on the moons surface.

“The radar assists in excavation by helping archaeologists identify areas where there are features under the ground, but GPR is also used as a non-invasive technique so that the site doesn’t have to be excavated,” said Joe Nigro, a geographic information systems specialist and archaeologist by training.


Earth scientist Compton Tucker explains the use of satellite imagery and radar technology in space archaeology.

After winning a NASA Research Opportunities in Space and Earth Sciences (ROSES) grant last year, the two men will join about 150 others affiliated with the Turkish Antiquity Service, the University of North Carolina, and the University of Pennsylvania’s Museum of Archaeology and Anthroplogy’s Gordion Archaeological Project. Tucker, Nigro and Jennie Sturm, a radar specialist from TAG Research, spent three weeks at the site compiling information about human settlement, artifacts, and agriculture, using tools that traditional archaeologists usually don’t have access to.

“Archaeology is inherently a labor intensive, and thus expensive in terms of time and money, so we rarely get to excavate an entire site. GPR and other geophysical techniques allow us to collect data on parts of the site we might otherwise not be able to investigate,” said Philip Mink II, a GIS manager and staff archaeologist from the University of Kentucky, Department of Anthropology. “These investigations may locate archaeological features such as houses, tombs, burials, trash and storage pits, and ceramic firing areas that can be targeted for excavation given the limited money and time field archaeologists often face.”

Mink, who has no affiliation with the Gordion project, believes that GPR is one of the most diverse and useful tools of all geophysical techniques used in archaeology.

The scientists spend hours dragging the radar device, which looks similar to a domestic lawn mower, across the fields of Gordion. Vital to archaeological excavation, GPR sends pulses of microwave energy underground. The energy bounces off buried objects and layers, and scientists can use the pattern of radar echoes received on the surface to create a subterranean snapshot.

“It looks like a box, you drag it across the ground and depending on the wavelength, it dictates how deep it goes. The lower the frequency, the deeper the penetration,” Nigro said.

Joe Nigro, a geographic information specialist, sets up his equipment to survey the fields of Turkey. Credit: NASA/Compton Tucker
› View larger image State of the art software will be used to process the 3-D radar data and construct virtual representations of the buried features. According to Mink, the amount of data collected per unit area surveyed by GPR definitely surpasses the other geophysical techniques because it is collecting data constantly at a variety of depths.

Nigro, who used the technology in graduate school to survey Civil War cemeteries and battlefields, and Tucker, who has participated in GPR surveys at other archaeological sites in Turkey, hope to use the data to pinpoint the position of tombs and artifacts prior to excavation, protecting them from both, natural elements, and looting in a country with a large market for illegal antiquities.

“One of the reasons we do the work, and are very passionate about it, is that we feel like what we’re doing is fighting against looters and plunderers who would find the more valuable things, trash everything else, and send them to Switzerland where anyone can buy them,” Tucker said.

“The context of how these objects were buried is completely lost, and instead they just become some sort of trophy on someone’s mantle,” he added.

GPR also allows the scientist to carry out their work while remaining culturally sensitive to the land, preventing the disturbance of burial sites or relics from the past; activity that may be considered taboo to some indigenous groups.

For years, archaeologists have collected incomplete spatial information about the Gordion site. Previous excavations have failed to produce exact referencing data, a major obstacle to the spatial and chronological analysis of the excavated material. In addition to the GPR work, Tucker and Nigro will create a multi-layer, three-dimensional common mapping system for the site in a geographic information system (GIS).

“This site level data on buried archaeological phenomena is a luxury many modern archaeologists often don’t get. We often test hypotheses and make interpretations based on the limited data we are able to excavate,” Mink said about why Tucker and Nigro’s field work is significant. “Having GPR and other geophysical data that shows other archaeological features throughout the entire site area allow the archaeologists to look for patterns across the site.”

From satellite images and digital elevation data the team of space archaeologists will anchor and standardize reference points using Global Positioning Systems (GPS), first developed by the U.S. military. They will compare land measurements with computed GPS data to correctly locate archaeological features by creating a network of points partially based on existing maps. Aerial and balloon photography from previous years will also serve to better locate trenches and structures from various excavation seasons.

In addition, the team is also using remote sensing technology to detect the dynamic changes in the environment caused by both natural processes and human practices, such as climate and agriculture. These environmental changes may be hidden to the naked eye.

“We don’t want to be limited by our eyes, so we use electromagnetic spectrum radar to look beneath the surface,” Tucker said.

To observe land use and land cover change in Central Turkey from 1950 to 2010 the project will also examine NASA Landsat satellite images. The imagery will be processed and analyzed to map natural and human-induced vegetation changes. For each time period the Landsat data will categorically be divided by areas with variations of water, forest, pastures and cultivation. Aside from contributing to the continued preservation of Turkey’s cultural legacy, the data from these NASA images will further promote sustainable development, according to Tucker and Nigro.

“It is important because we can figure out an excavation or preservation strategy based on our work,” Nigro said. “The agricultural change aspect of our study may help other archaeologists in developing and assessing a methodology and protection plan for preserving their sites.”

Both men anticipate the techniques developed in the Gordion Project will be applicable to many other archaeological sites with similar mapping problems, such as the Hassanlu site in Iran and Tikal in Guatemala.

“What these instruments do is expand our ability to study things,” Tucker said. “This is something NASA does to make our technology available to other people.” Christina Coleman and Melissa Quijada
NASA's Goddard Space Flight Center
Find this article at: http://www.nasa.gov/topics/earth/features/space-archaeology.html