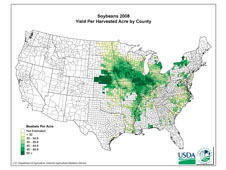 A U.S. Department of Agriculture study that looked at three states, Indiana, Illinois and Iowa, where soybeans are a critical crop in the farm economy. The upper midwest shows the highest yield of soybeans. Credit: USDA
Larger image 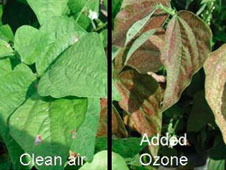 Above a threshold concentration, ozone inhibits photosynthesis and reduces yield in some plants like these snap beans, one of the more sensitive crops to high surface ozone levels. On the left are plants that have been exposed to "clean air" and are healthy, while on the right are plants exposed to ozone that are showing injury. Credit: Fitzgerald Booker, USDA-ARS Plant Science Research Unit, North Carolina State University 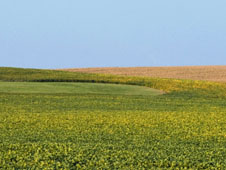 In the U.S., soybeans are a multi-billion dollar crop. Credit: USDA

The U.S. soybean crop is suffering nearly $2 billion in damage a year due to rising surface ozone concentrations harming plants and reducing the crop’s yield potential, a NASA-led study has concluded.

The study, presented at the American Geophysical Union Joint Assembly meeting, May 24 in Toronto, is based on five years of soybean yields, surface ozone, and satellite measurements of tropospheric ozone levels in Indiana, Illinois and Iowa. It revealed summertime ozone concentrations consistently exceeded threshold levels at which crops are negatively affected. The states, three of the biggest soybean producers in the U.S., account for a large chunk of the country’s $27 billion annual soybean crop. The study estimates damage to the soybean crop – by a yield reduction of approximately 10 percent – of at least several hundred million in some years in those states alone, and possibly more than $2 billion nationwide.

Ozone, depending on where it resides, can protect or harm life on Earth. In the stratosphere (6 to 25 miles, or 10 to 40 km above the surface), it shields Earth's surface from the sun's harmful ultraviolet radiation. Closer to Earth in the troposphere (surface to 6 miles, or 10 km), ozone forms from reactions between sunlight and manmade emissions and is a harmful pollutant, causing damage to lung tissue and plants.

The severe heat that descends on the farm country of the Midwest each summer has combined with manmade emissions to create increasingly higher levels of surface ozone over the past several decades. As temperature and the likelihood of stagnant summertime air masses increase, chemical reactions involving nitrogen oxide, hydrocarbons and carbon monoxide in the air – often the emissions from fossil-fuel burning – create widespread smog and its most prevalent component, surface ozone.

At the ground level, too much ozone causes respiratory problems in humans. Research attributes as many as 4,000 deaths per year in the U.S. to elevated ozone levels in the summer. Ozone similarly affects plants. The compound enters plants through pore-like openings in their leaves and then reacts with surfaces inside the plant to cause oxidizing damage through tissue destruction. The result is depressed photosynthesis, stunted growth and, for sensitive crops such as soybeans, reduced yield.

Climate change scenarios present numerous global problems for agriculture in this century, with the probability of more severe and extended droughts. But there’s also the strong likelihood that as cars, factories and power plants both here and abroad continue to change the fundamental chemistry of the air, the altered atmosphere will negatively impact the biological processes of important crops.

"In the 19th and early 20th century, background surface ozone concentrations were relatively low so that an increase of 25 percent, (5 to 10 parts per billion), didn’t affect living organisms," said Jack Fishman, a research scientist at NASA’s Langley Research Center. "But now, we’ve crossed the line where you can expect to see modest increases in surface ozone result in crop growth being stunted."

Since the early twentieth century, surface ozone levels in rural areas in the Midwest have doubled, Fishman said. The U.N.’s Intergovernmental Panel on Climate Change (IPCC) predicts that surface ozone concentrations will rise another 25 percent by 2050. In the southern region of the three states studied, peak daytime concentrations often surpassed 60 parts per billion. And so the yields in the southern region definitively suffered. In the northern region of the area studied, averaged concentrations were nearly 20 percent lower, and the impact of ozone was less.

"Background conditions are rising. Precursor emissions are rising," said Elizabeth Ainsworth, a professor of crop biology at the University of Illinois. "This is likely to get worse in the future and impact a greater area of the Midwest."

The methodology used in this study provided a unique, broad-scale look at the impact of ozone on crops. The question of impact on yield has, until now, largely been addressed by closed, chamber studies and on a larger scale at open-air facilities like the one at the University of Illinois, called SoyFACE (Soybean Free Air Concentration Enrichment). This study proved that space-borne satellite measurements of tropospheric ozone – derived from NASA’s Total Ozone Mapping Spectrometer (TOMS) prior to 2005, and from the Ozone Monitoring Instrument (OMI) since 2005– have provided useful indicators of surface ozone concentration over a far broader area than ground-based monitors. The study used both satellite and surface observations of ozone, historic yield data and a sophisticated statistical model that also included factors such as ozone, temperature and soil moisture. The multiple linear regression analyses isolate the impact of those factors in order to outline ozone’s effect on crop productivity. The results compared favorably to the SoyFACE experiments and other experiments where ozone was artificially increased under controlled conditions.

Soybean yields – like that of most major crops – have risen dramatically over the last half-century due to advances in crop science and fertilization. This study suggests surface ozone concentrations in these key soybean-growing states represent a threat to the crop’s ability to, at the least, sustain such yield increases.

Jack Creilson, a former NASA Langley employee now at the Climate System Research Center at the University of Massachusetts, said the advantage of the satellite-derived method is that it can be used worldwide. Poorer countries have little monitoring capability and even in the U.S., croplands are so vast that a land-based network of ozone sensors would be extremely expensive to construct and maintain.

"You have these farming locations that have no way of measuring surface ozone," Creilson said. "What we had to do was come up with a way of showing them there’s a benefit of having the information."

The first benefit of having the information, Ainsworth said, is simply pointing out the problem. Soybeans – along with wheat and rice – are among the more sensitive crops to ozone. Observing ozone levels and extrapolating their yield impact could eventually play in role in the development of new, more tolerant cultivars, Ainsworth said.

Ainsworth pointed out that while the problem will likely get worse, its effects are being felt today.

"Yields across the country are lower than they otherwise would be," she said. "We are losing a very significant chunk of the potential yield."